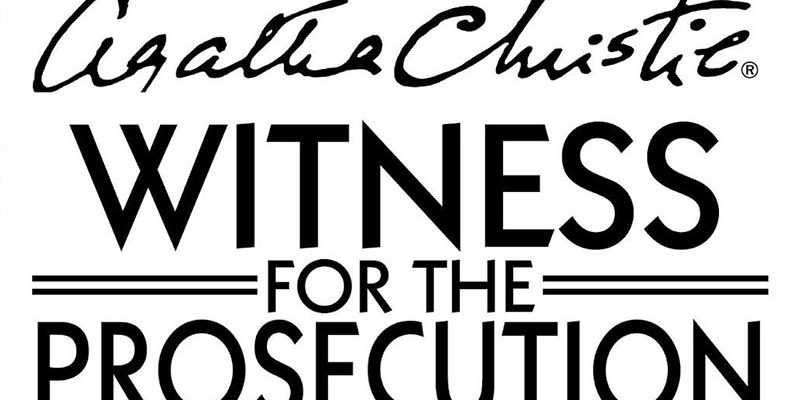 ‘Witness for the Prosecution’ is a very cleverly written whodunit by Agatha Christie. Initially published in 1925 as ‘Traitor Hands’; several years later, not satisfied with her original ending, Agatha Christie added an extra character, a woman at the end of the play. It is now being presented by the Joondalup Encore Theatre Society, in the Padbury Community Hall – just off the freeway – at 15 Caley Road, Padbury.

This intriguing two and a half hour mystery can be seen on Friday and Saturday evenings at 8.00 until the 29th August.

The setting is London around 1960.

The chambers of Sir Wilfred Roberts QC were well furnished, with quality furniture and a fine selection of reference books. The gold, grand drape (stage front curtain) was an ideal backcloth to this scene.

The second scene was of a courtroom in the Old Bailey, most effectively furnished with inventive, cleverly sourced fixtures that gave quite an authentic setting (Stage managed by Vicky Williams).

Young Leonard Vole (Alex Halse – very good) is an amateur inventor, happily married to Romaine (Helena Hillgaertner – wonderful). He met a rich widow, Miss French, whom he hoped would finance his latest invention. One day he learns that the widow has been murdered, and so he employs a solicitor, John Mayhew (David Cowell), as quickly as possible. Mayhew then decides that a top barrister is required, and so introduces Vole to Sir Wilfred Robarts (Peter Neaves – superb). Within seconds, Inspector Hearne (David Eriksen) is at Robart’s chambers to arrest poor Vole.

Robarts, his private secretary Miss Carter (Diane Campbell) and her junior assistant, Emily (Michaela Graziano) are all sure of Vole’s innocence, but his only alibi is his wife. With Judge Wainright (Andrew Fairfoul) allotted to the case, and with the brilliant Mr Myers QC (Liam Gobbert) for the prosecution, Vole must find someone else who can prove his innocence.

In court, Miss French’s Irish housekeeper, Janet O’Brien (Vicky Williams) is called to the witness box by The Usher (Daniel Bradshaw), shortly followed by Dr Wyatt (Michael Khouri) – things are looking bad for Vole. The Forewoman of the Jury (Diane Campbell) looks at another jury member (Teneeka Robinson) and they shake their heads. Surely, when things cannot get worse for Vole, an unknown woman (Tarryn McGrath) is called to the witness box. Finally, Romaine unbelievably agrees to be a witness for the prosecution.

Could a tart, Christine (Kayla Wynne), who calls at the chambers be Vole’s saving grace?

This is an impoverished, but very ambitious theatre group. The lighting rig consists of four medium powered floods on floor stands at the side of the audience. Last night – mid play – one globe exploded showering glass everywhere, luckily, no one was injured, but this left only three lights to illuminate a front apron scene and a full stage with 15 actors.

When the lamp blew, the actors on stage (Peter Neaves, Alex Halse, David Cowell) showed outstanding professionalism by continuing without a flicker.

There were two scenes, the first ‘a barrister’s office’, was in front of the stage curtain. It was built on a 20 cms dais, so that it would not block the next scene on the stage when the curtains opened, however, with all of the seating being on a the hall floor the eye line for the audience was at times tricky. Normally the stage should be at least 50 cms higher than the floor, or the seating should have every second row of seats rising on a 20 cms dais. Now sadly the group is working on a VERY limited budget, perhaps they could try the Lottery Commission and / or perhaps a few community groups may have old incandescent lamps or bio box equipment that they no longer require. This talented group need every little bit of technical assistance that they can get.

The main actors were excellent, but a couple of players with minor parts, struggled; in fact one actor had a couple of fluffs per line of his short script, the most I have seen in years – your fellow actors who were giving it their all, deserve better support from your cameo part. On the other hand, there was a young lady, still in Year 11, along with a few newcomers to the stage, who can be very proud of their performances.

Director Sharon Wigley (with assistant director Ben Robinson) proved herself last year with the zany, madcap ‘‘Allo ‘Allo’ and she has now turned her hand to an extremely difficult, dialogue based story, but has come out the other end with a most successful, serious play.

Sharon is generous enough to take on ‘virgins’ and hone them with care into giving wonderful performances. The cast has worked together immaculately in order that no clue will be given to the murderer.

I have not seen this play on the stage before, but with the lack of physical action, suspense relies upon crisp dialogue. Because a stage production cannot be edited like a film, a good delivery is essential. The courtroom action was gripping throughout.

Yes, this is produced by a community theatre on a meagre budget, but they succeeded in the main aim, i.e. giving the audience a wonderful and exciting night out. Congratulations.