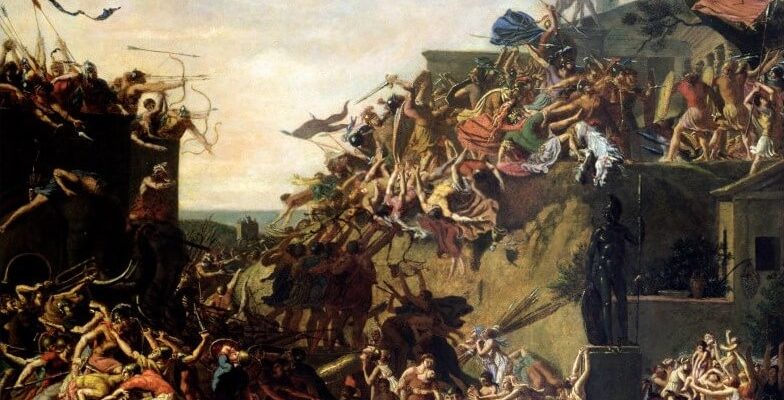 ‘Ajax in Iraq’ was written by 57 year old, American playwright and actor, Ellen McLaughlin, who wrote several award-winning books based on the Persians and the Greeks. This story is a brutal mix of Sophocles’ classic, 2,000 year old Greek tragedy and modern day tension in the Middle East. The local student-based theatre company, Black Martini Theatre, produced this 100-minute play (no interval) for three nights at the end of August, in the Studio 411 (the modernised Murdoch University Drama Workshop) at Murdoch University, South Street, Murdoch.

The set (designer – Sam Knox) comprises a bare stage floor, painted with a fascinating map of the Middle East as it was in 1890. Wooden pallets and sandbags stand at the side. Rear stage is a long canvas tent, with a central entrance. Katie Southwell’s lighting design was low key, adding to the drama and misery of the situation. Jess Serio’s sound design was impressive.

Jess Bennett-Hullin’s costume design was complex and varied. With help from John King, as Military Adviser, Jess had to ‘equip’ a modern day army, fighting in Iraq, along with ancient Greek warriors complete with tabards, chitoniskos and greaves. All combatants were complete with weapons.

With a golden spear in her hand, the goddess of war and wisdom, Athena (Chloé Laffar) enters and explains how distressed she is by the behaviour of military hero, Ajax (Rhys Hyatt). He is slowly losing his sanity and killing animals, thinking they are Greeks being led by his arch enemy, Odysseus – also known as Ulysses (Hock Edwards). Ajax has a few faithful warriors (Shannen Precious, Tay Broadley) but most have deserted him.

We jump forward a couple of millennia as a platoon of American soldiers wearing night sights enters the same desert scene.

There is Debbie (Cat Perez) back for her fourth tour in Iraq, then there is a sex-starved sergeant (Launcelot Ronzan) who ‘using’ a young female recruit, AJ (Sam Knox) for his fun. In the evenings the women try to avoid the males by playing cards. Rugged soldier, Sickles (Amanda Ferguson) looks after the innocent recruits, whilst the chaplain (Luke Gratton) provides for their mental care and the nurse (Claire Tebbutt) tries to cope with the injured.

At one stage, in a very moving speech, Constance Mangus (Tijana Šimić) tries to explain what the war is doing to the soldiers, but finds it hard to justify the suffering and skirmishes. How little war has changed over the years.

For Thomas Dimmick, this was a particularly difficult play to direct; he had to convincingly show the ancient lifestyle and aggression of the Greek troops, with a contrasting modern narrative of today’s soldiers with their advanced weaponry, and yet retain the playwright’s clever use of parallels. The actors were required to give powerful and assured performances, as no one is fooled by a set of wimpy soldiers. On the whole – with Harriet Fettis’ movement choreography – the tension and horror of the situation held up very well for the whole 100 minutes of this drama.

With material gained from interviews with Iraq war veterans and their families, the script is poignant. Once again several of the actors stood out as they ‘lived’ the wretchedness of the soldiers. Cat Perez as the grieving soldier, riddled with guilt at not stopping the suicide of her friend; and Sam Knox, as AJ, who was horrifyingly raped, by her sergeant, just as Cassandra had been raped by Ajax, both gave particularly convincing and moving performances.

Rhys, as Ajax dripping in blood (great makeup) perfectly captured the madness of this ancient warrior.

This production was – due to the subject – very heavy going, but it had numerous qualities not often seen in student productions of this complexity. Great team work.