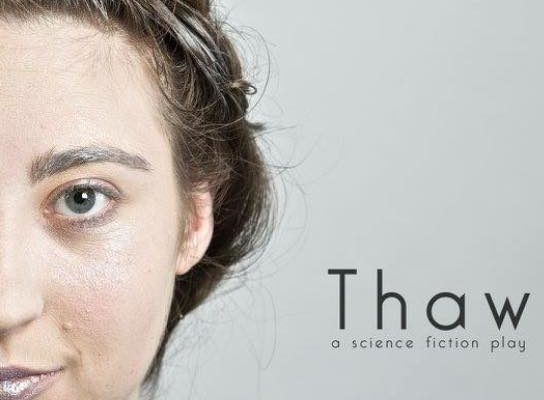 ‘Thaw’ has been written by Stephen B. Platt as part of his Honours studies. This unusual science fiction piece will be the first play to be performed in the newly renovated Drama Workshop, now known as Studio 411. This new theatre space can be found next to car park 4, Murdoch University, South Street, Murdoch.

The theatre now has a smarter entrance hall, a proper Bio Box, an improved lighting grid, cushioned bench seats, along with thickly insulated walls between the theatre and the rehearsal space next door.

The play is 65-minutes with no intermission. There are three performances, Friday 21st August and Saturday 22nd at 7.30 pm, with an extra matinee fitted in at 3.00 pm on the Saturday due to sell out evening performances. This leaves one wondering – Why are there so few Science Fiction plays?

The scene (set design – John King) is a dimly lit laboratory, with a thermal awakener unit leading to the cryogenic area. There are computer screens controlling the authentic airlock doors (operator John Bailey). At the rear of the laboratory is the control centre, comprising a massive screen with never-ending computer jargon flowing and various technical boxes glowing. A hospital bed is at the side of the room.

The Esana Inc. cryonics facility is available to the public for hire. If for some reason you wish to be stored at icy temperatures until a future date, then for a fee this company will look after you. Seven very different people, who had signed up, are now being urgently awoken.

First out of the chamber is James (Dean Lovatt), who has been in storage until a cure is found for his ‘delicate condition’. He checks the computer screen information, hoping to find the date, or even the decade! The airlock door buzzes and angry Hedy (Anna Weir) emerges, quickly followed by conman Matt (Aaron Jay) who looks very sick. Matt explains how he had arrived 10 years after Hedy had expected to depart – why had not she been woken up?

Disabled Paula (Nicola Brescianini) and pregnant Tara (Bethsaida Tapsall) are both looking for some special medical treatment. The Transfer door buzzes and a happy, elderly man emerges, this is John (Ron Arthurs), who believes every day should be joyous. Seconds later Dr. Ettinger (Jason Dohle), the controller of the Unit, emerges. At last, there might be some good answers to the pandemonium and upset.

Writer / director Stephen Platt has skilfully created seven believable characters for his unusual story. So rare is this genre for the stage, that when I was trying to think of a play to compare it with, I was at a loss. In the last decade, I think this production has a unique style. The characters are well considered, filled with traits and attitudes that helped keep the story threads twisting. The storyline included all of the important elements, suspense, black comedy, straight slapstick, mild violence, tragedy and of course, love. The dialogue was a little thin near the beginning, but by the end, the interaction was crisp and the words matched the personalities well.

Sci-Fi is not normally my favourite style, but I really enjoyed this play. It was so much more than being blinded by weird science; the storyline was solid, with a clever, unexpected ending.

To a nice bloke and a name to remember, good luck for the future Stephen B. Platt.