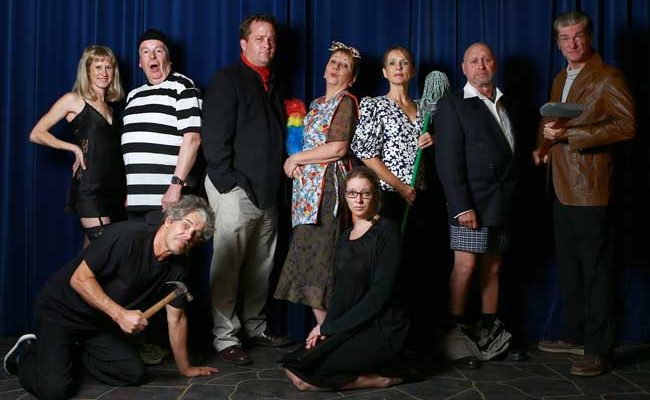 ‘Noises Off’ is a hilarious farce, a play within a play, written by Tony Award winning UK playwright, Michael Frayn. Frayn wrote the play in 1982, based on what he saw from the wings whilst watching Lynn Redgrave performing one of his plays ten years earlier.

Presented by Serial Productions, the quality team renowned for their comedies, who recently brought us the hugely successful ‘Open All Hours’ and ‘Blackadder’; this riotous play can be seen at the Old Mill Theatre, Mends Street, South Perth until Saturday August 29th. There are two matinees, one on Sunday August 23rd and the second on Saturday August 29th both at 2.00 pm.

On the reasonably small stage of the Old Mill Theatre, multi-award winning set designer, George Boyd has managed to construct (aided by Liam Kirwan and Brendan Tobin) a two-storey set, which has to be rotated twice in each show. Considering that this old community theatre has no flies, mechanical equipment and limited resources, this is an unbelievable achievement.

On installing the set, it was found that a cross beam holding the theatre roof up stopped the rotation of the scenery. How was this major problem overcome? George allows the audience to see the second change, which took TWO – yes two – minutes to carry out, consequently receiving a massive cheer from the audience. The stage crew of David Seman, Natalie Watson and Owen Davis were supervised by stage manager, Rob Warner.

Act One is a dress rehearsal of a second rate farce, ‘Nothing On’ on the stage of the Grand Theatre, Weston-Super-Mare. It is set in ‘a delightful 16th-century posset mill’, recently updated by the owners who are now holidaying abroad. The house is now available to let.

The set comprises a Tudor-style sitting room, staircase and upstairs balcony leading to the bedrooms as viewed by the audience. In Act Two we see behind the set, as though looking out through the sitting room window to the audience beyond. The set for Act Three is as for the first Act.

‘Nothing On’ by Robin Housemonger (a fictional author) is a poorly written, sex romp that is nearing the end of its rehearsals; however, it is still full of fluffed lines, poor entrances and lost props. There is no hiding the fact that this touring troupe has absolutely no talent, nor has the company’s temperamental director, Lloyd Dallas (Peter Clark).

We, the audience, watch as the whole of their dress rehearsal is enacted.

In Act One, the telephone rings, Mrs Clackett (Jacqui Warner) the forgetful cleaner, enters the sitting room carrying a plate of sardines. She explains to the caller that the house owners, over-stressed Freddie Fellowes (Keith Scrivens) and his wife Belinda (Clare Fazackerley) are tax exiles living in Spain, and that the local estate agent, jealous Garry (Rodney van Groningen) is in charge of the letting. Just as Mrs Clackett goes into the kitchen, the front door opens and in walks Garry with Brooke (Krysia Wiechecki), the ultimate dumb blonde bimbo who keeps losing her contact lens. Thinking that the house is empty, he has arrived to show this ‘client’ around the property – especially the bedroom!

Despite the dedicated hard work of the over-sensitive stage manager, Poppy (Kylie Isaia) and her confused assistant, Tim (Alan Markham) are struggling to keep up, as the props go missing and the production staggers on. At the end of the play, an aging burglar, played by an alcoholic ham called Selsdon (Brendan Tobin) breaks into the house. Being extremely deaf, Selsdon tends to miss most of his cues.

One month later, the company are performing at the Theatre Royal in Ashton-under-Lyne. Act Two is under way for a matinée performance. We are now backstage, so the audience is effectively watching how the bitchy actors’ attitudes change when they come off stage. We become aware of their secret love affairs, the pandemonium of failing props and the panic created by missing actors.

Act Three shows the end of the ten-week season, by now the company has reached Stockton-On-Tees. The quality of the show has deteriorated, with everyone passing the blame and at each other’s throats. Eventually, these backstage problems spill into the on-stage performances.

There were two excellent programmes (Scott Print), one for the real cast, the second a fun version of the touring troupe’s show.

A farce must have plenty of doors to aid confusion and mayhem, this show has 9 on two levels, and yet the timing of the dozens of entrances and exits was faultless. Props (provided by Lesley Sutton) such as the whisky bottle and the sardines, moved position every 10 seconds, and still the actors’ actions were immaculate, never missing a beat.

Joe Isaias was brave enough to take on the post of production director, but with his being an award winning actor, he co-ordinated the pandemonia, squeezing the humour out of every situation.

Every actor’s performance was stunning, producing the funniest version of this play that I have ever seen. There were jokes and incidents that have completely passed me by in the past. The pace was at a breakneck speed, hardly giving the audience a second to breathe before the next belly laugh. Most of these actors are producers of their own shows; could this be the reason for the perfection?

Within the play ‘Nothing On’, each actor’s on-stage personality was different to their private demeanour off-stage. Garry was a clear and assured actor, but a stammering highly jealous person behind the scenes – Garry (Rodney) had a painful episode that left me cringing. Brooke fluttered, hilariously, like an egotistical yet damaged butterfly. Director Lloyd was trying hard to have an affair, audition for Richard III and still direct his lousy cast.

The superbly constructed script was clever in the way that a minor incident, such as the mention of ‘blood’ could breathe disaster to Freddie. This would then lead to dissonance amongst the others, as they all fell over like skittles. The final entry of Selsdon as the robber was hilarious as he was ‘shadowed’ in every wooden, overacting pose.

There was some slapstick, but not the blatant in-your-face cream pie, but with unlikely props such as the telephone, contact lenses and the ever present sardines. The well-designed costumes ranged from sexy and attractive, to that of the robbers’ and the cleaner woman were all produced by Clare Wood and Jacqui Warner.

The lighting was by Liam Kirwan and the sound courtesy of George Boyd.

This complex play was so slick at every level that it left the audience breathless and yet begging for more. If you love zany, madcap humour or simply admire advanced theatrical skills, then this is the show for you. This will be memorable for years to come. Stunning.