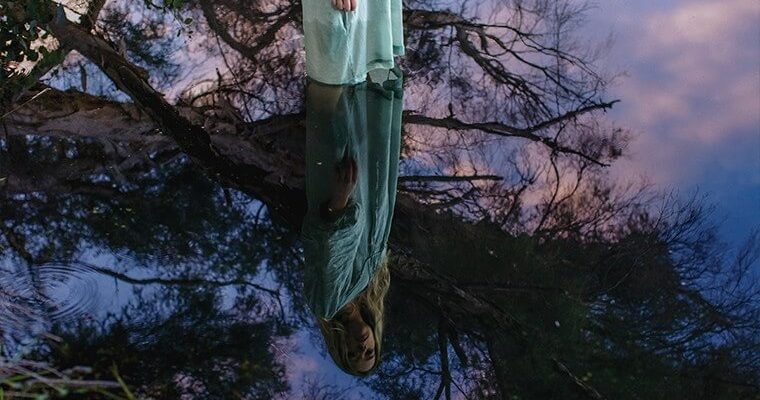 ‘Latitudes’ is a fine blend of fantasy and gothic horror, and is the latest play for adults from the much-admired playwright, Mark Walsh.

This 60-minute, disquieting mystery is a The Lost Boys presentation, produced by Georgia King. It can be seen at the Blue Room Studio, Perth Cultural Centre, James Street, Northbridge at 8.30 nightly until Saturday 5th September.

The set is of a cove at the foot of some cliffs near Blackpool. Set designer, Patrick Howe, has constructed a most convincing, rugged cliff face with black plastic sheeting. On the ground is the sandy beach covered with thick foam (stage managed by Meabh Walton).

The lighting designer, Chris Donnelly, and the sound designer, Will Slade, have obviously worked together very well, to produce the tremendous atmosphere. The play calls for dramatic, threatening storms with periods of enlightenment, which Chris has captured beautifully; when coupled with possibly the best soundscape I have ever heard, the overall effect is outstanding. For the full 60 minutes of the play, Will’s sound is a subtle blend of rumbling, low level music and wonderfully vibrant, stereo, seaside sound effects that really built up the tension.

It is early morning in a small cove on an island close to shore. A middle-aged woman (Claire Munday) wakes to find herself covered in spume. She sits up and looks around. Where is she? What is worse – who is she? Along the beach comes a teenage girl (Tessa Carmody) who looks familiar. She has the same mannerisms and body gait as herself. They talk and it becomes apparent to them that they know each other; in fact, they could even be related.

The women talk and soon discover that they had both been to a dance at the hotel on top of White Climb. The older lady remembers meeting a terrible old woman called the ‘Crab Turtle’ and believes that she may have stolen part of her memory.

As they chat, a girl (Jo Morris) in her mid-twenties walks out of the crashing waves. Again they notice the resemblance. This soaking girl is covered in blood; and is that a piece of flesh that she is carrying?

What has she found in the stormy sea? What made her lose her memory too? Could it be depression, worry or even conscience?

The director, Mikala Westall, soon after winning a Fringe World award, received a prestigious ‘Emerging Artist Award’. Mikala has been mentored by another respected director who has given her confidence over the years, Joe Lui.

This is a very difficult abstract story to produce. It is important to retain the suspense, and drip feed the story to the audience. Often this results in a tedious presentation that can become frustrating, and you find yourself continually looking at you watch – talented director Mikala and her superlative cast have handled this story with an amazing amount of skill, making the audience want more in an attempt to piece together this captivating, beautifully written complex story.

All three actors conveyed the confusion and fear of their isolation with delicate skill. Beautiful team work and sensitive acting.

Driving home you will be asking ‘Does that mean she ….?’ as the tale finally clicks into place. A brilliant production that will give you food for thought.