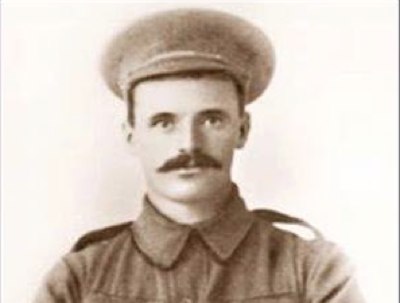 ‘A short play season.’ The Old Mill Theatre is presenting two wonderful, short plays by local author Noel O’Neill. Noel is well known for his rather risqué comedies, but here his writing is in a different genre and at its very best. The first story is a tragically sad tale that was heard all too often when I was a young lad. The second is a dark comedy; again, many of us will know a similar family.

These richly written plays can be seen at the Old Mill Theatre, on the corner of Mends Street and Mill Point Road, South Perth each evening at 8.00 until 24th September. LAST SHOW THURSDAY.

A brief film flickers on the wall, showing the hell of the First World War trenches.

It is now 1918 in a military hospital. The room door opens and a young man is led by the hospital orderly (Rex Gray) to his iron framed bed. The man (Kieran Garvey) is dressed in blue striped pyjamas, and has a Victoria Cross pinned to the jacket pocket.

This is the true story of Martin O’Meara VC, we learn how he left his job as a sleeper cutter in the forests near Collie to go to Europe and fight the Huns. Here he is, back in the safety of his home surroundings, yet he is strangely restless and at times extremely distressed at his comfortable surroundings.

What has brought about this shell shock in such a young man?

This is only Kieran’s second part on the stage. Not only does he have the challenge of a 50-minute monologue, but also it is packed with every emotion. He is happy one minute, followed rapidly by severe depression. He relives the stench and horrors of his trench traumas. Kieran has completely captured the fabulous depth of character created by Noel. It is a heart-rending performance that subtly packs a great deal of detail into the script and acting, but without feeling preached at. This is an exceptional performance.

The front door slams and young Betty (Jayne-Louise O’Connell) enters her Mum’s kitchen, yet again catching her Mum, Shirley (Rachel Bartlett) smoking another cigarette. Betty is angry, because despite her mother knowing that she has cancer she seems to be making little effort to help herself.

This is a dark comedy / drama. The basic storyline is one we all know, and may have had to deal with, but Noel has created two very recognisable characters, and added a plenty of humour. Two very good performances.

The lighting, sound and AV beautifully handled by Graeme Johnson and Kathryn Carney.

Director Noel O’Neill has once again, bravely given a ‘chance’ to a couple of stage newcomers. He has skilfully guided them through the pitfalls and shown them some good stage techniques. It is always wonderful to have someone who generously ‘risks’ disaster by giving his new play to an inexperienced cast, but in both these plays they have shown their appreciation by producing admirable performances.

This is the second last night so try and catch these treasures.