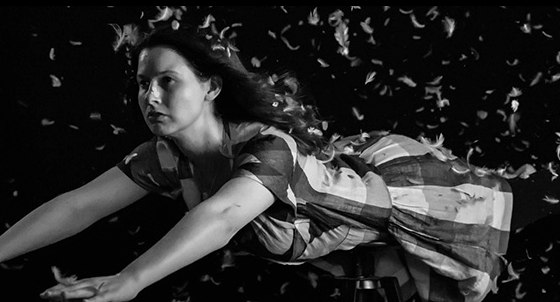 ‘Falling Through Clouds’ is another visual epic of animation, puppetry and live performance created by ‘The Last Great Hunt’ company, comprising creator / performers Adriane Daff, Arielle Gray, Chris Isaacs and the original team leader, Tim Watts. This is their first new work since ‘The Adventures of Alvin Sputnik: Deep Sea Explorer’ and ‘It’s Dark Outside’ that toured internationally, collecting prestigious awards on its way through numerous continents.

‘The Last Great Hunt’ is a comparatively new, independent theatre company formed by Western Australia’s best young theatre-makers – named above. They create imaginative theatre in a variety of forms and styles.

The outstanding original soundtrack is by award-winning composer Ash Gibson Greig, who has a wonderful feel for just the right instrument, volume and tempo for each character and scene. In this performance he takes us from gentle, soft strings to a dramatic, full orchestral piece reminiscent of Holst’s Planet Suite (Opus 23), the pounding ‘Mars’.

This highly inventive 55-minute performance, which has been rated more suitable for over 15 year olds by the creators, can be seen at the Perth Institute of Contemporary Arts performance space nightly at 7.30 until Saturday 11th October.

It is the middle of the night, and zoological scientist Mary (Adriane Daff) is tucked up in bed. The doona falls off and she finds herself speeding through space. Then, travelling in an air balloon, Mary floats through the dark night and lands on a remote island, the home of biological experiments. It is here that she meets the head scientist (Chris Isaacs). He enlightens her that they still have two eggs from the now extinct genus – ‘bird’.

Mary and her lab assistant (Arielle Gray) are given the task of hatching these eggs and nurturing them. Can Mary raise healthy normal birds? Or will she hit problems? What is Mary’s lifelong ambition?

In the previous shows, the puppets were small and the operators ‘invisible’. In this much more ambitious production, some of the puppets are the size of the operator. With the shiny nylon, protective lab suits worn by the puppeteers (they usually wear black cotton body suits) and the higher lighting level, some of the magic was lost. Having said that, some of the effects were breathtakingly convincing. Mary’s final flight, the bird running and Henry’s petulance were exceptionally inventive. Many of these technicalities were overcome by Tim’s dad, designer Anthony Watts.

This production started in the usual ‘cute’ way, but then went through a very sad and dramatic stage. The slick and ingenious blend of pre-recorded audio visual, coupled with live video often had one wondering how the magic was performed. As with any magical trick that looks so effortless, the amount of rehearsal, failures and revamping of the idea can be endless.

With such ambitious innovators, and this team are fairly unique in Australia, it may take some time to smooth off some of the rough edges of their opening night, but their sheer genius and daring will guarantee them another major success. With the cinema and TV pumping out computer-generated effects, the expectations from a stage production can be a little unfair; however, I can guarantee you will never have seen anything approaching this in live theatre before. The numerous gobsmacking visual effects, and there must be around a couple of hundred in this single production, were performed at breakneck speed and with immaculate timing.

Another MUST SEE from The Last Great Hunt.