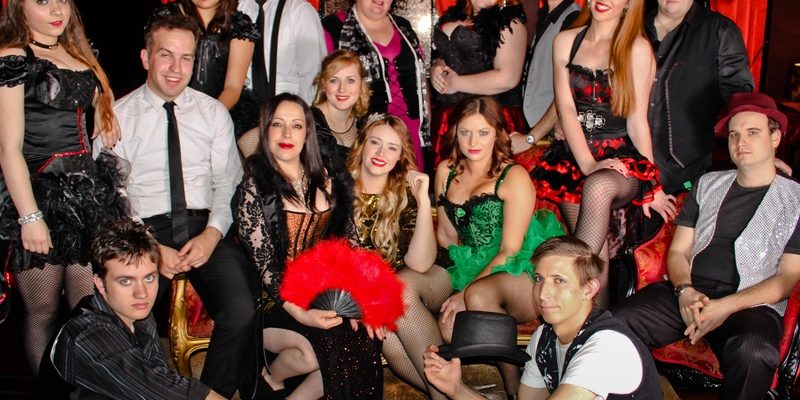 ‘The Temperamental Artist’ is an adult, very dark comedy, the stage play being adapted by Mitch Brian from Charles B. Griffith’s 1959 classic cult movie ‘A Bucket of Blood’. Griffith, who was born in Chicago in 1930, wrote numerous sci-fi film scripts, most were tongue in cheek. So successful was his ‘A Bucket of Blood’ film script that Griffiths went on to write the 1960 low-budget classic, ‘The Little Shop of Horrors’. The film was shot in three days, with Griffiths receiving the princely sum of $800 for his labours.

This ‘Psycho’-like play, although a bit grizzly only has the violence inferred. It is being presented by the very successful Dark Psychic Productions at the Phoenix Theatre, Hamilton Hill Memorial Hall at 435, Carrington Street in Hamilton Hill. The 90-minute performances are at 8.00 pm on Thursday, Friday and Saturday nights until Friday 5th June, with a 2.00 pm matinee on Sunday 31st May and another on Saturday 6th June.

Generously, the proceeds of the raffle and programme sales go to the Autism Association of WA.

On the stage is Walter’s apartment, part of a block of flats. It is scruffy and typical of a young man’s pied-à-terre (designed and built by Wayne Gale and Pat McMahon).

In front of the stage, on the floor of the auditorium, is a very well furnished, chic café with several gingham-clothed tables and a main serving counter. The abundance of first-rate props and original artworks were supplied by Emma Muller, Alison Kovacs and Ryan S McNally.

Nervous and introverted Walter (Zachary Inglis, excellent) is a busboy – a catering worker who has all of the jobs too dirty for a waitress – working at the chic beatnik café, ‘The Yellow Door’. The café is managed by Leonard (Glenn Scott) and aided by his two capable waitresses, Carla (Maree Andersen) and Sylvia (Bethsaida Tapsall).

Pacing around the coffee shop, wearing a yellow beret and reading from a book of his latest poetry is Maxwell (Daniel Rooney). In a dark corner is a suspicious character, Al (John Grey) who is whispering on the public ‘phone to his partner Lou (Adrian Archer). A couple of hippies, dreadlocked Will (Sean Drill) and his more refined friend, Buddy (Kane Anamwong) are smoking a joint and plotting their next crime.

One day, on his way to work, Walter meets his landlady, the interfering and annoying Mrs Swickert (Devetta Ridgwell) who is looking for her lost cat.

At the café, Walter asks Leonard if he can exhibit his artworks; within minutes, Mr Hughes, a local millionaire (Pat McMahon) enters with his gold-digging wife (Kate Lloyd), who immediately falls in love with Walter’s new masterpiece and must buy it. With the promise of an exhibition, the now famous Walter has attracted the attentions of both the voluptuous Alice (Kayti Murphy) and the local, influential art critic (Ryan S. McNally).

Will Walter’s career bloom? For which work will he become most famous?

Following on their success with Mitch Brian’s horror/comedies, ‘Maul of the Dead’ and ‘Sorority House’, Dark Psychic Productions’ have chosen yet another of Brian’s creepy tales. The play has been described as a comedy noir, but I am not too sure about the term ‘comedy’. The experienced director, Shaun Griffin and his most capable assistant (directing for the first time) Alison Kovacs, have gathered their regular, skilled troupe of actors. This is a very unusual play, but the cast have bonded well, and created a chilling atmosphere. The acting was well up to standard, but some of the entrances and exits although well planned, were a little slow; however, I saw the final rehearsal and have full faith that this will correct itself.

From arriving at the theatre, it becomes very obvious that the ‘Yellow Door Café’ theme is being carried throughout the show. The colour scheme of rich canary yellow and black is carried through the entrance hall artworks, to the furniture, props and the many costumes. Ryan S McNally has created some wonderful costumes in the colours.

Assistant director, Alison, is also the stage manager for this large cast. Alex Coutts-Smith’s lighting design works very well, although at times a little less light could enhance the mood. His lighting is operated by Daniel Muller, with brother Brett Muller operating the sound.

This weird thriller will appeal to the Dark Psychic Productions fans, but with only a few shows you will have to get in quickly. PS don’t smile at Walter!