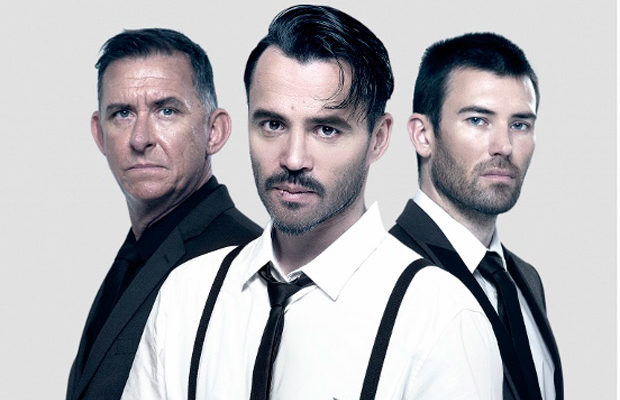 ‘Glengarry Glen Ross’ is a semi-autobiographical play by David Mamet, based on his time working in a real estate office. It was first performed in 1983 at the Royal National Theatre in London. It won the Pulitzer Prize and a Tony Award in 1984.

Amazingly, the 1992 film despite having an all-star cast with actors like Al Pacino (nominated for an Oscar), Jack Lemmon, Alec Baldwin, Ed Harris and Alan Arkin, did not break financially even. The script contains references to Polaks, Chinks and the ‘Patel’ family’s way of doing business; whilst filming the producers were forced to remove the derogatory comments about the Indian family.

This enthralling, 95-minute (no interval) production can be seen nightly at 7.30 in the Heath Ledger Theatre, within the State Theatre Centre of Western Australia, on the corner of William and Roe Streets, Perth. The season runs until Sunday the 14th June.

The play opens in an L-shaped Chinese restaurant, with the clients seated in individual, tabled booths. The walls are trellised wood panels, the seating rich scarlet leather. This most authentic effect is topped with the ever-present, lucky waving cat.

The real estate sales office was remarkably spacious, with all of the fixtures of a well-established company. Richard Roberts and his associate, Patrick Howe, designed the stunning sets and costumes – from the slick salesmen’s suits to the cheap baggy trousers of Mr Lingk. Stage Manager Georgia Landre-Ord, assisted by Claudia Blagaich ensured the smooth running of the props and stage rotation.

Jon Buswell’s lighting design was cleverly contrasted; from the warm welcoming atmosphere of the restaurant to the stark, brightly lit office. The mood was perfectly enhanced by Ben Collins’ sound design and soft musical compositions.

Mitch and Murray is a large group of Chicago real estate agents. The owner, much to the chagrin of the employees, sends his arrogant, cold and calculating nephew, John Williamson (Will O’Mahony) to run a branch office, Premier Properties.

Shelley ‘The Machine’ Levene (Peter Rowsthorn) was, until recently, the most successful salesman of the decade; but Williamson has his favourite salesmen in the office, and so gives them the only ‘good leads’, i.e. those properties most likely to achieve the best prices.

The play opens in the local Chinese Restaurant where middle-aged Shelley – who hasn’t made a sale for ages – is grovelling to Williamson for a decent couple of leads, such as the Glengarry Estate, instead of the unsaleable, rundown rubbish that has been sitting idle on the books for months.

Around the corner of the restaurant, in another booth, are two more employees that are disgruntled. Ruthless, loudmouthed Dave Moss (Kenneth Ransom) has had a bright idea, and is trying to get on board, the depressed, nervous George Aaronow (Luke Hewitt). He wants George to break into their own branch office and steal all the details of the prime properties, in order to sell them to Jerry Graff, their local rival. Aaronow is horrified, but somewhat interested.

In another corner, top salesman Ricky Roma (Damian Walshe-Howling) who has few morals, is smooth talking a timid, elderly man, Mr Lingk (Steve Turner) into buying a property and is about to go in for the kill.

Next day the police are called into the real estate office and Detective Baylen (Ben Mortley) gets to work interrogating, determined to solve a crime that has taken place overnight.

The play has a slow start, taking a few minutes until you know where the men work and what their ‘good lead’ is. Voice and dialect coach, Luzita Fereday, has taught the cast a soft, unobtrusive, Chicago accent and thankfully all of the players have the same drawl.

I have seen this play three times in the past, and come away totally unmoved, thinking ‘what a lot of words about nothing’, consequently I was quite reluctant to see this play again. Luckily I did go, as under the guiding hand of director Kate Cherry the whole meaning, depth of the rich dialogue, the tension and hateful competition suddenly came to life. This is one of these magnificent plays that either works brilliantly or dies miserably – with nothing in the middle. It takes a special team of fine actors to bring such a play to life, and here we have the cream. As a fly on the wall, you learn of the tensions, dirty tricks and heartbreaks of working in the real estate business.

Every actor has captured their richly written characters superbly; however, a special mention must be made of Peter Rowsthorn, who performs a whole spectrum of emotions, an outstanding and moving dramatic performance from one of the country’s funniest comedians.

There is frequent coarse language, and 90 minutes of solid, unrelenting bitterness with no light relief; however, you are left a little drained, but certainly not depressed.

It is rarely that you leave a theatre so overwhelmed by the standard of acting you have just seen. Black Swan at its very best.