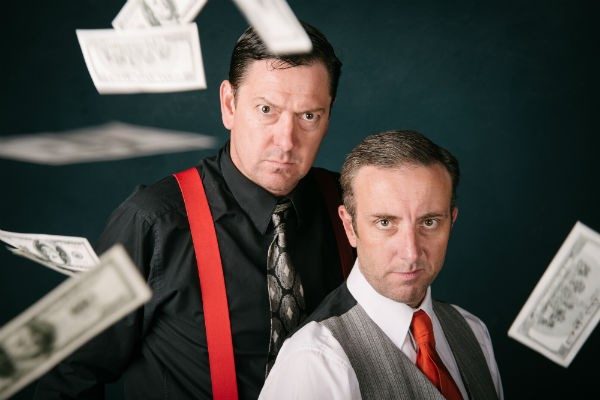 ‘Horsehead’ is a very dark, hilarious comedy by the highly respected WA playwright, Damon Lockwood. This play was first presented at the Blue Room in Northbridge in 2008 and was nominated for the ‘Audience Choice Award’, the next year it was nominated for ‘Best new Play’ at the prestigious WA Equity Awards.

Lockwood, who was nominated by Actors’ Equity for a Best Actor award, has since appeared regularly in major productions at the Heath Ledger Theatre. Likewise, Sam Longley has appeared at the State Theatre. Both actors work in Improvisation and as a result are very well known for their wacky humour, and fabulous rapport. This kind of comedy is becoming quite rare these days, with the natural quips almost being a thing of the past. The couple have captured the essence of Woody Allen’s old stand-up routine, with clever use of puns, double-entendres and a full-bodied comedy script with laughs every 15 seconds.

If you saw ‘The Godfather’, in one scene, a horse’s head appeared on a film producer’s pillow; this is the ‘true’ story as to how the horse head got there. If you had written a play about the Mafia, where is the one place you would avoid performing the show? Italy!! Not for these two madmen, they took the show to Italy – for an astounding six seasons – and even won the prize for Best Play at the Rome Fringe; before going on to the New York Fringe.

This crazy 50-minute production can be seen at The Studio Theatre, in the Subiaco Art Centre, 180 Hamersley Road, at 7.30 each evening until Saturday 6th June. The show can be seen at a later date in Mandurah and Merredin.

The scene is the Fonzie Brothers’ flat in Miami. There is a bentwood hat stand, a small side table with an old fashioned ‘phone and a large sofa. Set and costume designer, Cherie Hewson, has crafted an amazing prop that had the audience rocking in their chairs with laughter.

The atmospheric, Italian soundscape and musical composition was by multi-award winning musician, Stephen J. Hearne. The well-designed lighting was the work of Andre van Vulpen.

After a year working in Hollywood, Eddy Fonzie (Damon Lockwood) has returned to live with his rather nervous brother, Philippo (Sam Longley) on the East Coast.

Philippo, who has always wanted to become a famous and respected gangster, has just been offered a major job by the mob – an offer he can’t refuse. The task is a grisly one (don’t worry folks, there is no gore), a mission he is not too enthusiastic to carry out, however, his brother Eddy is keen to try anything.

Magnificently directed by Damon Lockwood, you find yourself unable to blink in case you miss another priceless expression or gesture. Although probably rehearsed to incredible detail, and performed around the world over seven years, every move and mannerism flowed perfectly, with the performances still having a wonderful freshness to them. The duo’s timing was immaculate, being reminiscent of Laurel and Hardy at their best.

The fast moving show occasionally went into a humorous, slow motion routine. Even though this farce was slick, I suspect that there were an extra couple of private joke lines, with a few additional punches and slaps as these professionals soaked up the audience’s enthusiasm.

50 minutes of riveting absurdity, so seldom seen these days. Definitely worth going to see, even on the wettest of winter’s nights, be sure to go for a warm, feel-good chuckle.