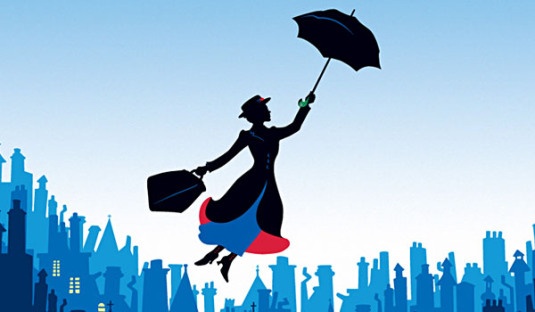 ‘Mary Poppins’ is a much loved book, written by Queenslander P. L. Travers, who died twenty years ago, aged almost 97. P. L. Was born Helen Lyndon Goff, but later modified her name to Pamela, although her best friends called her by her middle name ‘Lyndon’. Along with her roommate, Madge, she adopted a son.

This outstanding, 2 hours 45 minute local production of the Broadway musical is being proudly presented by MPAC and Stray Cats Theatre Company. It can be seen in the 550-seat, beautifully equipped theatre in the Mandurah Performing Arts Centre, on the Boardwalk in Mandurah.

The half dozen ‘sold out’ performances finish on Sunday, 24th May.

The location is Banks’ family home, a big house in Cherry Lane, London in 1900.

There were several demanding sets (designed by Jon Lambert, Brett Morris and Karen Francis), demanding in so much that Mary had to perform her magic (effects by Brad Tudor and Anita Telkamp). The artwork of the scenic backdrops was stunning (Bronwyn White, Aiden Thomas and cast), with Sheryl Gale’s props giving the special finishing touches.

After losing several nannies, thanks to tykes Jane (Maren Gosby, understudied by Mikayla Wyartt) and Michael (Sebastian Coe), their mother, Mrs Banks (Helen Kerr) is at her wits end and asks her officious husband (Jon Lambert) to advertise for another. Before the letter is even in the post, Mary Poppins (Kristie Gray) with gamp in hand, appears at the Banks’ household.

Mary Poppins takes the children to the park, where they meet Mrs Lake (Kristie Hennessey), her Scottie dog and chimney sweep, Bert (Daniel R. Nixon). As they watch the children fly their kites, Mary brings a touch of magic by making the statues come alive. When the valuable male statue, Neleus (Jayden Lyon) vanishes, the nervous park-keeper (Christopher Riley) panics.

Back at the Banks’ home, the dim butler, Robertson (Nicholas Gaynor) is getting his orders for the day, from housekeeper Mrs Brill (Jo Bickford) – he has to bake and ice a cake for a house party that evening. Being urgently called to the bank, by the Chief Cashier (Thomas Hennessey), Mr Banks is certain that his dismissal is near. On the way, he meets the ragged, bird woman (Jeanette Southall) outside St Pauls. She gives Mr Banks a few life messages.

Mary encourages fortitude in the children in her care, along with all of her friends, by introducing the colourful Mrs Curry (Brad Tudor), Katie Nanna (Monique Kinnest) and Von Hustler (Oliver Clare) as they lead in the singing and dancing of Sherman Brothers’ ‘Supercalifragilisticexpialidocious’.

Musical Director, David Hicks (assisted by Joshua Haines) conducted the 12-piece orchestra playing in the pit under the stage, with vigour and sparkle. The crystal voiced, lead singer, Kristie Gray, also had the massive task as Vocal Director to the cast of 50. There is inevitably a couple of the chorus – even leads – who will let a show down with bad singing or lack of focus; here we have a production that is as near perfect as one can get. It was hard to believe that the cast are all locals and not famous, established national talent.

Choreographer, Andrea Beissel had a similar task; with the stage crammed with 40 dancers, it would have been easy to take the lazy way out and have the whole troupe doing the same actions for every number. Instead, Andrea (assisted by Ashleigh Riley, Megan Doohan) gave us a treat, with several complicated routines, flawlessly carried out on the stage simultaneously.  ‘Supercalifragilisticexpialidocious’ was the piece de resistance, sung with perfect diction, this energy filled, tongue twisting number was performed at breakneck speed. The hundreds of wonderful costumes for the show, were designed by Cathy Wainright and tailored by Pat Francis, Kiara Cassano, Margaret Willison, Hannah Andrews.

Karen Francis is no ordinary director; she gets an ambitious idea and goes for it. Whether it be a play with a difficult story to present, a spicy comedy such as ‘Calendar Girls’, or an adult production like ‘Steaming’; Karen will grab it by the horns and give the audience a show to remember. How does she do it? By the earning the love and admiration of every actor and stage crew with whom she has ever worked.

When Karen decided to present ‘Mary Poppins’ my heart sank a little, this is one of the best loved children’s books and well-known films ever. It has all of the ‘avoid’ factors, children, an animal (bless Toto who was impeccably behaved), special effects, singing and a chorus of around 40 teenagers. Instant suicide. Then there is the cost risk of hiring a large theatre – double suicide! You look at the credits in the programme and find that Karen has also helped manage the production (with Jon Lambert) and is lighting designer, a foolhardy master of all? Not at all, excellent organisational skills.

A couple of small whinges, the odd headset was a little toppy, with the treble too high, giving occasional poor clarity to the dialogue. The fly wires used for the flying sequences were exceptionally thick, but the kids loved the effect, with Mary and Bert moving beautifully.

I know I joke about programmes, but 20 glossy, full-colour, A4 sides for $5 (congrats to Jon Lambert, Jayden Lyon, Kristie Hennessey, Peter and Rhiannon Francis) must be the offer of the year – so every family bought one. I have been to shows with similar programmes at $25 and virtually no one bought one.

The Stray Cats next production in mid-October, is ‘Chitty Chitty Bang Bang’ so be warned that after such a magnificent musical as this, the tickets will be gone in hours.

A truly breathtaking, quality show that could easily have run for weeks. This demonstrates what can be done with skill and a great deal of courage. Have you always hankered after trying something new? Be like Karen, GO for it!!

VERY many congratulations to all concerned, I was not at all surprised to see so many members of the enthusiastic audience giving a standing ovation. Spectacular.