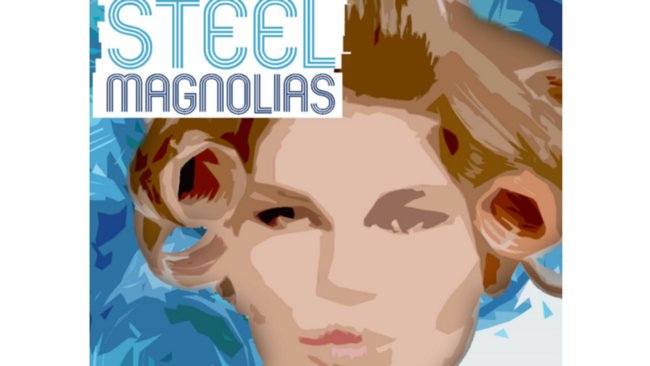 ‘Steel Magnolias’ is Robert Harling’s 1987, universally acclaimed play based on the death of his sister Susan. The title refers to how women can be as tough as steel, yet as fragile as flower.

This well-crafted play is a joint Koorliny Arts Centre and Kwinana Industries Council production, and can be seen at Theatre One, Koorliny Arts Centre, 20 Sulphur Road, Kwinana Town Centre at 8.00 pm on Friday and Saturday nights until 29th August. There are two matinees, one on Saturday 22nd and the other on Sunday 23rd August – both at 2.00 pm. Kwinana is closer than you think.

The scene is an upmarket hair salon in north western Louisiana. The set is exceptional, with all the trimmings of a real beauty parlour (design Jon Lambert, Kate McIntosh, Ryan Taaffe: construction by Stephen Carr, Julian Williams). There are the hydraulic chairs, working sinks and washing sprays, electric drying hoods, trolleys with all of the necessities for hair and nail care. At the rear is a kitchen. To the side is the shop door leading onto a walled patio. The floor has a large tiled pattern. (Décor and props are by designers and Allen Blachford, Lee Germain).

The scene changes, under Kate McIntosh’s supervision, were some of the best I have seen. The stage crew, Jon Lambert, Allen Blachford, Brittany Kirk, and Josh Germain were outstanding, they knew precisely what was expected, they had their own tasks, moved in with the dimmest of light, replaced and removed props and left silently.

Alex Coutts-Smith’s lighting design was evenly spread over the large area (harder than it sounds), with one or two special effects (operated by Lee Germain). The sound was perfectly cued by Alex Coutts-Smith.

The costumes were perfect, from the designer label clothes of Clairee to the mad Christmas outfits – Lisa Watts excelled.

We enter the salon as a young nervous girl, Annelle (Chantel Bell) is applying for the trainee’s job. The beauty parlour’s owner, Truvy (Natalie Burbage) is seated in the chair whilst scatty Annelle, totally lacking in self-esteem and with hands shaking, tries to impress her. Annelle gets the job just as a wealthy client, the former Mayor’s widow, Clairee (Sue Murray) arrives for her weekly trim.

Truvy explains to Annelle that their main client today will be Shelby (Jamie Tunbridge), who is getting married that afternoon. No sooner has Shelby arrived with her mother, M’Lynn (Tracy Noble) when, being a diabetic, she has a hypoglycaemic fit. M’Lynn explains to the ladies in the salon that due to her type 1 diabetes, sadly Selby cannot have children.

Momentarily, the peace is broken by the arrival of a brash and rough-as-guts farmer, Ouiser (Leanne Tunbridge), who wants to know all about Annelle’s past and has no qualms about telling the stylist what she thinks about it.

Several months later, as Truvy is putting up the parlour’s Christmas decorations, Selby’s mum – M’Lynn – announces that she is to become a grandmother; Selby is pregnant and thankfully her diabetes seems stable.

What a ridiculous challenge to take on, presenting one of the cinema’s Top Ten ‘weepies’, but director Ryan Taaffe – assisted by Hillary Readings – has done just that, and succeeded ! The first hurdle to overcome was the Deep South accent. Wisely, the cast have been given just a hint of the twang, and not the full annoying drawl.

Annelle and Truvy were required to deliver their lines perfectly, whilst appearing to have all of the hair dressing, cutting and trimming skills of a real stylist. Because of the warm chemistry between the actors, the emotion and tenderness of the story built up beautifully, the audience really cared about the story’s characters. Annelle oozed insecurity, Truvy was the caring motherly type, even wealthy Clairee was loved in this small village and she loved back.

Shelby and her mother could easily have overacted and ruined the effect; instead they understated their parts and immediately captured the audience. Finally there was Ouiser, an absolute rat bag who treated everyone abruptly, but in the end showed she too was a compassionate part of the community. Some richly observed scenes, beautifully presented.

After adoring the film, you may be a little apprehensive in case you see a disappointing play, thus spoiling the fond memory. Don’t worry for a second, this is a powerful production, with all of the sentiment and comradery of the book and film – you will still need the tissue box.

This cast is as good as you will see anywhere, so try and catch this production, it deserves to be seen.