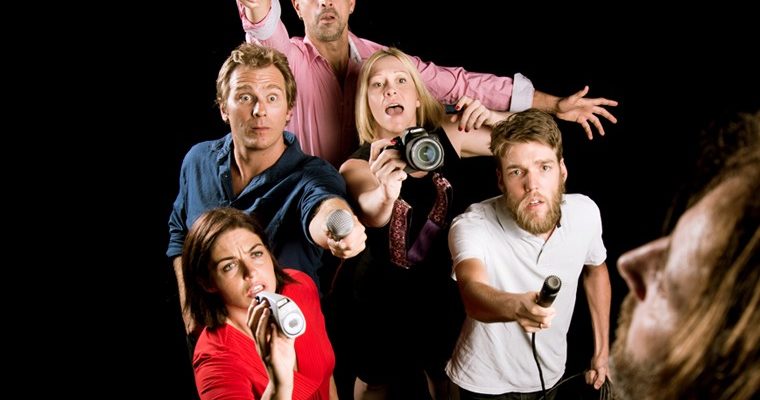 ‘Jesus: No Ordinary Life’ is the latest zany, Damon Lockwood comedy. This WA playwright has become famous for his madcap humour; you may have seen this Equity nominee a couple of weeks ago in ‘HorseHead’, or quite recently in a major production at the Heath Ledger Theatre.

Over the years, Lockwood’s slick, beautifully constructed comedies have been performed in Edinburgh, New York and Italy, all to rave reviews.

This hilarious, one-hour, World Premiere from producer Talei Howell-Price, can be seen at the Blue Room Theatre Studio, in the Perth Cultural Centre, Northbridge each evening at 8.30 until the 4th July.

The set is a rustic table and chairs, with red curtains as a backdrop. There are several unusual religious props and costumes – designer Cherie Hewson.

The time is 4 months BC, and Mary (Andrea Gibbs) and Joseph (Nick Pages-Oliver) are discussing Mary’s enlarging tummy, when a booming voice from above (Sean Walsh as God) states that Mary is now bearing the son of God. Mary has a major contraction, screams ‘Jesus’, and God decides that this could be a great name for the child.

Twenty years later, the Church is having trouble keeping their congregation and so they call for an advertising team to help promote their message. The company is run by self-centred manager (Sean Walsh) and his assistant Luna (Talei Howell-Price), who see Jesus (Shane Adamczak) going around doing his party tricks, but decide that he has not quite the body image that they are looking for. Eventually they settle on a male model with plenty of sex-appeal, Mr Lot (Brendan Hanson).

This new recruitment programme is working well until God and the author, Damon Lockwood (voiceover played by Nick pages-Oliver) think the whole situation should be revised.

The director, Damon Lockwood, has gathered a few of his best friends to perform this new sacrilegious play. Although some may consider the script blasphemous, it creates a great deal of doubt about the preached ‘truth’ surrounding the good book. The cast are all wonderful comedians, many stand-up solo performers, with some working as a part of Perth’s most successful and talented improvisation team.

Damon’s inventive dialogue comes from years of professional storytelling and comedy work, so his writing is tight and uproarious. His work requires a special kind of dry delivery, and the whole cast operated perfectly as a team, carrying the audience along with the riotous story.

A few comical pieces of artwork from Yvonne Doherty, Pascale Giorgi and Alex Manfrin gave a novel twist to the storyline. Robert Woods dramatic sound effects along with Michael MacLean’s lighting helps the pandemonium to flow.

As always with Lockwood’s productions, every show is sold out within hours of the season starting. Get a ticket by any means – tell them Jesus needs you.

An adult show that will have you smiling days later.