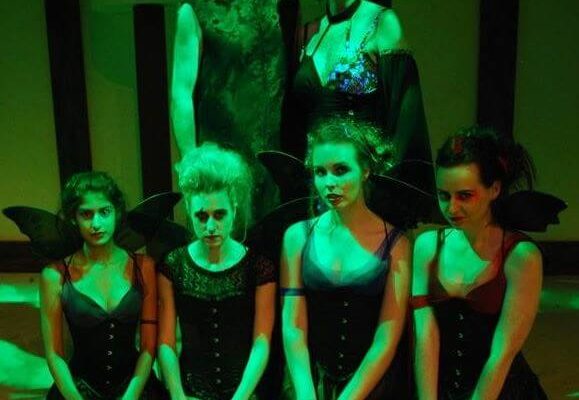 ‘A Midsummer Night’s Dream’, one of Shakespeare’s most loved comedies – written in the 1590s – is Garrick Theatre’s contribution to Shakespeare’s 450th Birthday Festival that is being supervised by Douglas Sutherland-Bruce. Three local community theatre groups have combined to produce this repertory-style Festival.

The set is an authentic looking Tudor courtyard with a central, flowering tree. The Elizabethan stage, designed by Richard Coleman, has Tudor walls of dark beams of wood and cream horsehair cement. There are two balconies and several alleyways leading onto the yard.

It is early morning, and Hippolyta (Jayden Payne) buttons up her dress after a prenuptial encounter, and drags the Duke of Athens, Theseus (Jesse Wood), onto the palace balcony. Into the courtyard, come Lysander (Samuel Tye) and the love of his life, Hermia (Clare Thomson) whose father Egeus (Michael Hart) is not far away, as he spies his daughter in the arms of an undesirable. He immediately insists that his daughter should marry Demetrius. Moments later, their best friends Helena (Gemma Sharpe) and Demetrius (Finn Alexander) join them and discuss a secret meeting in the woods outside of the city.

With Theseus’ Royal Wedding about to take place under the moon, Philostrate (Natasha Smith) holds an audition for the reception’s entertainment. Peter Quince’s (Adrian Wood) play gets the contract and so he gathers a team together to perform his ‘masterpiece’. His troupe is a collection of local, ignorant handymen. There is Snug, the joiner (Ben Anderson), Robin, the tailor (Melissa Scott) and three others. The weaver, Bottom (Rodney van Groningen), the world’s best actor – in his own mind – plays the enthusiastic and romantic Pyramus, who when looking through a chink in the stone wall, played by a tinker, Snout (David Semen) spots a wondrously beautiful woman, Thisbe (Alan Markham).

At the rehearsals for the mechanicals’ play, the situation becomes confused as the middle-aged, king of the fairies, Oberon (John Taylor) and his queen, Titania (Jacqui Warner) practise their magic. The punk-looking court jester, leader of the fairies, Puck (Krysia Wychecki), under Oberon’s instructions, gathers a group of fairies (looking very much like a group of loveable street urchins) Pease Blossom (Melissa Clements), Cobweb (Dailin Manning), Moth (Natasha Smith) and Mustardseed (Jayden Payne).

The magic and confusion has just begun!

With very few props, Don Allen’s delightful lighting design, operated by Liam Kirwan, gave a mystic atmosphere to the woodland scenes. Costume designer, Nyree Clark has attired the fairies in dark costumes, black wings and trendy, modern striped tights. The men wore modern day trousers and waistcoats, and the women were dressed in skirts, corsets and basques. For Puck, Nicole Jelly and Nyree designed an unusual, long, windswept hair do, and their makeup for Oberon was quite space-age.

Director, Peter Clark, has given a completely new approach to this perennial play. Oberon is portrayed as quite a threatening character and yet surprisingly this worked very well.  The play within a play is extremely funny and very bawdy, but still suitable for young teenagers. The audience loved it.

The style of acting, whilst not strictly classical Shakespearean in its approach was easily understood and made the play most accessible to any newcomers. As always at the Garrick and Marloo, the standard of acting was first class. Every actor captured the mood of the play perfectly. Special mentions for Krysia, as the chaotic Puck, and Rodney as Bottom, a truly memorable performance.

It is always good to see a new slant on a Shakespearean play, and so even if you have seen this play several times you will love it.