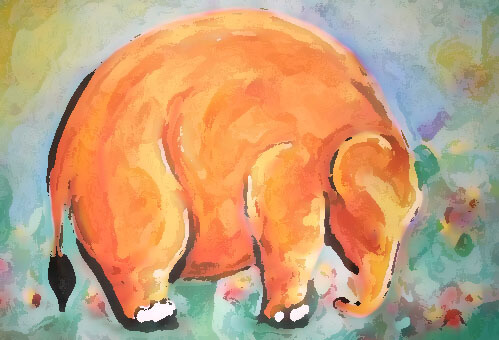 ‘The Awakenings’ is one in a series of plays written by Murdoch University lecturer, David Moody.

In every performance, at the Drama Workshop (next to car park 4), Murdoch University, 90 South Street, Murdoch, there are two plays being presented for the low price of one; they are ‘Elephant Dreaming’ and ‘The Awakening’.

The two and three quarter-hour performances are nightly until Saturday 5th April. Curtain up at 8.00 pm. There is one matinee on Saturday at 3.00 pm.

The stage has a massive elephant head painted on the black rear wall.

‘Elephant Dreaming’, was written and directed by Dr. David Moody.

We find ourselves at the elephant enclosure of a second rate, uncaring zoo.

Several elephants are sitting around, bored out of their minds trying to entertain themselves. Mary, a senior Elephant (Belle Venus Toy) is reading a magazine, and Jenny, the ancient elephant matriarch (Clare Talbot) a book. Jenny, who should be leading the group, has not spoken for many decades and is constantly depressed. Lying on the floor is Kimathi, a mature rogue Elephant (Bob Morshidi) along with his nephew, the younger, excitable Rollo (Ryan Partridge), they are playing chess together.

A loud whistle is sounded and a voice shouts ‘It is Showtime!’ It is the contemptible zoo keeper, Tony (Tadgh Bird) who is more worried about being admired by the audience than worrying for the animals in his care. The pachyderms stagger to their feet and disinterestedly take up their positions, ready to ‘amaze’ the audience.

We gradually learn the tragic life stories of these captive creatures.

In spite of the powerful display of anger by Kimathi, the beautiful singing of Jenny and the heart rending tale by Mary, this play dragged on. To be fair, it is advertised as ‘a work in progress’, but it was 30% too long. The jovial zoo keeper tackled his character’s part well, displaying the keeper’s insincerity perfectly, so that the audience wasn’t really lifted out of the interesting gloom.

The pace was deliberately slow to show the ennui of the animals, but with the unrelenting sad tales of cruelty to the animals and no real light relief, the play was hard going.

‘The Awakening’, written and directed by David Moody, and co-directed by Rebecca Thompson.

The scene is Caliban’s island after the end of Shakespeare’s ‘The Tempest’ tale. For decades the sorcerer and misogynist, Prospero (David Moody) has ruled. This has forced several famous and misunderstood women in history, mythology and literature to join forces and to beckon the help of the mother of Caliban, Goddess Sycorax (Karen Hansord), a malicious and dominant enchantress.

Included are the wildly outspoken Medusa (Cat Maree Perez) a hideous female, with venomous snakes for hair; then there is the exotic dancer, Mata Hari (Janice Lim) a Dutch spy executed by firing squad during World War I.

Quietly at the side sits Hamlet’s mother, Gertrude the Queen of Denmark (Katherine O’Brien) who married Claudius, Hamlet’s uncle who had just murdered his father. She is talking to Medea (Bethsaida Tapsall), who redressed her husband’s disloyalty by slaying their children.

Morgana (Belle Venus Toy) was a powerful sorceress, the nemesis to Merlin, King Arthur’s magician. Morgana was thought to be Lady Igraine, wife of the Duke of Cornwall, so that Arthur became her half-brother.

Dressed in a white dress was Artemis (Rebecca Thompson), the Hellenic goddess of the hunt, virginity and reliever of disease in women, she is sitting in deep conversation with Joan of Arc (Karen Hansord) the powerful French, religious army leader. Joan was initially unwilling to take part in the women’s scheme, but later relented. Into the gathering came Miranda (Jerry Bates), Prospero’s daughter. Perhaps the coven could use Miranda a lever against Prospero.

Sadly the dialogue for each character was fairly similar, verbose and with a clunky richness that occasionally brought inappropriate, spontaneous laughter form the audience. One audience member could hardly breathe she was laughing so much.

I like the premise of the play, with very interesting characters who promised so much more. The flow was broken with  blackouts as the actors repositioned, ready for the next tableau. The actors all showed the same ‘ham’ performance, over dramatic, body language that made one wonder about the directing instructions. Had it not been for Medusa (Cat Maree Perez, complete with cat’s eye contact lenses – superb) whose performance appeared natural and added the necessary comic interlude, this could easily have been a ‘walk out’ play.

Sadly, I have seen very much better work from the actors, writer and directors.

The show was advertised as two hours for both plays, at almost three it was very hard work and this was reflected in the very brief, polite final applause.