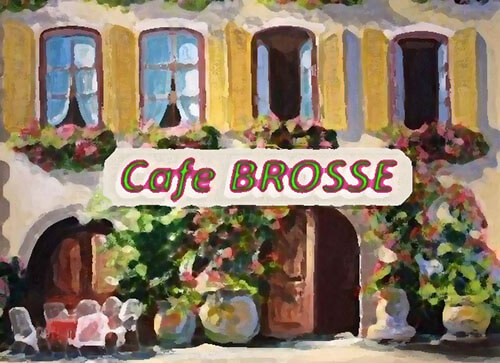 ‘Café Brosse’ was written by the prolific British playwright, Jean McConnell, who wrote the successful and popular ‘Deckchairs’ that was presented by this company five or six years ago. McConnell wrote some of the ‘Dr Finlay’s Casebook’ TV scripts 50 years ago, and was still writing plays well into her eighties.

This comedy / farce will be Harbour Theatre’s final production at the Port Cineaste Building in Fremantle. Sadly this comfortable theatre is to be demolished, thus requiring the Harbour team to move yet again, to new temporary premises for the remainder of 2014.

The set is one of Harbour’s best, a patio area with vines growing in the trellis work, and a superb clay tile (painted) floor (Brian Mahoney, Tanya Rumithya, Julie Mackay, Tina Barker). The café itself was beautifully furnished in a French style. The stonework walls and the fleur de lis bar, all in rustic finish (Melissa Bassett, Beth Law). Most impressive.

Middle-aged, with spare tyre, George (Alan Morris) and his beautiful wife, Seraphine (Kirstie Francis) are opening their café for the day; the Café Brosse, in a small insignificant French village. The monotony of the place is getting through to Seraphine and she feels unappreciated. Into the café comes a smartly dressed businessman, Aramis (Marcus McGavock), George’s only real friend and they happily spend hours talking about their stamp collections.

Aramis is amazed to learn of George’s secret life and his young nymphet, Yvette (Fleur Wylie). Just as Aramis is coming up with some suggestions on how to revive the love in George and Seraphine’s life, a cyclist and keep fit fiend, Raymond (Peter Scarrott), offers some unusual advice.

Two young tourists (Verity Wells and Scott Wilson) arrive at the café clutching brushes, the main product of the village. Their car has broken down, but no one can understand a word they say.

Will true love come to George and his two ladies? Or will the arrival of his old Aunt Marie (Ann Speicher) ruin the whole affair?

Under the assistance of French dialect coach Pascale Benkiraine the cast were most impressive. The young couple utter gibberish – an unknown foreign language – but very convincingly. Award winning director, Nicola Bond, has chosen a wonderful cast who have given their all to this play. They have extracted every funny situation and given the best possible delivery. There is a running (tedious) joke about the student travellers and brushes, hence the name of the café being Brosse (French for brush).

When it takes almost half an hour to get a decent smile, when you think that you see little story threads being developed and nothing happens. When situations are staring the writer in the face and yet another opportunity is missed, one can only feel so sorry for the skilled team who have been badly let down by the bland script.

Let us hope it won’t be too long before we see the Harbour Theatre group in a permanent home – the regular shuffling around is soul destroying for all concerned. Harbour Theatre has been Fremantle’s only community theatre for over 50 years, they deserve a quality home.