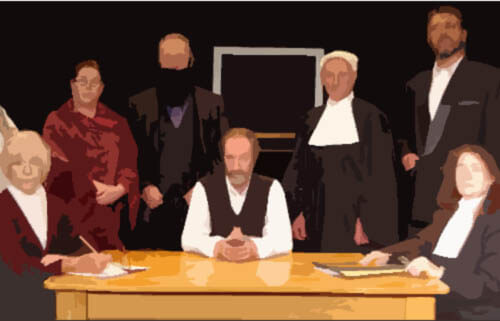 ‘The Trial of C. Y. O’Connor’ by Fremantle playwright, A. ‘Tony’ G. Evans, is a biography of C. Y. O’Connor’s later life blended with a fictitious situation. It is being staged by ARENAarts. Tony Evans was a radio and TV, producer and presenter for many years. Some 30 years ago, Tony won the Premier’s Literary Award and has not looked back since.

After a one-off performance at the Fremantle Workers’ Club for the Fremantle Heritage Festival, the 2-hour show transfered to the pleasant Latvian Centre Theatre, 60 Cleaver Terrace (just off Belmont Avenue), Belmont with shows nightly until Saturday 31st May.

The surrounding walls are black drapes. The set, although simple, worked very well. It consists of the Judge’s Bench, complete with the Insignia on the rear panel, the Dock and the Witness Box. There is a large wooden table in the centre of the stage for the use of the defence and prosecution Counsels.

The Clerk of the Court (various, but on our night Peter Nettleton) leads the accused, Irishman C. Y. O’Connor (Tim Prosser) to the Dock. He is followed by the Counsel for the defence (Trish Theisinger) and the Counsel for the Prosecution (Dale James). The Clerk calls for the Court to be upstanding. The audience are the gallery and jury combined, and so stand whilst the Judge (Norm Heath) enters.

It becomes clear that a case has been called against O’Connor because of the amount of WA Government money that he has ‘wasted’ on various ‘doubtful’ schemes, and that he should be called to justify this and any backhanders that he may have received.

The first witness for the precaution is called; she is a snooty, self-opinionated, retired UWA historian (Francesca Meehan). Next to be called is a scruffy young man, Vosper (Mario Piccoli) who also tries to discredit the WA legend.

The State Premier John Forrest (Justin McAllister) and his business owning brother, Alexander Forrest (Dale Lovett) are called to the Witness Stand, followed by O’Connor’s sister Mrs Irvine (Caroline McDonnell) who, in a flash-forward, refers to her late brother and his fine qualities.

After the summaries from the Counsels, we are asked by the Judge to go away and consider our verdict.

There is very little one can do to create movement in a Courtroom, but the director, Peter Nettleton has kept the pace moving along very well. The acting was a little variable, but this did not detract too much from the fascinating story and the exposé of the mud thrown at poor O’Connor. The achronistic changes were a little confusing, but were soon easily accepted.

The witnesses were almost caricatures, but this light relief added to the play’s enjoyment.

All of the teching was capably handled by Simon James, with excellent costumes of the day and barristers bar gowns by Bree Vreedenburgh.

An interesting and educational night out (not for under 12 years as the topic is quite staid), well presented and enjoyable.