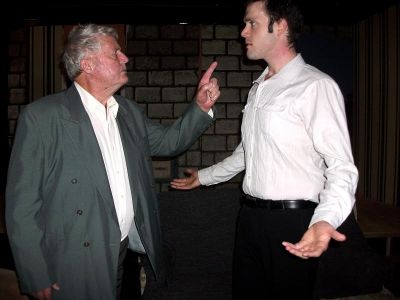 ‘The One Day of the Year’ was sensitively written in 1958 by a 31 year old Fremantle lad, Alan Seymour. Alan had a very full life, living in several countries and writing extensively for radio and TV. This is his most popular play, and unlike so many half a century old scripts, it does not show signs of aging. The messages and visions of family life are still as relevant today.

This fine presentation can be seen at the Old Mill Theatre, on the corner of Mends Street and Mill Point Road, South Perth. The two and a quarter hour performances can be seen at 8.00 pm on Thursday, Friday and Saturday nights until the 24th October. There is an extra show on Wednesday 21st and a matinee on Sunday 18th at 2.00 pm.

The 1958 scene is a lower-class, family home in a high density housing area of Sydney.

At the rear of the stage is a rostrum with two sets, a kitchenette and Hughie’s bedroom. At the front of the stage is the sitting room. The construction and decoration of this first-rate set was by Phil Barnett, Travis Markham, Calvin Munro, Michiel van Doorn and Sarah Christiner.

Sitting around the kitchen table, is the man of the house, bigoted and opinionated Alf (Chris Henderson) who is lecturing an old digger and lifetime friend, Wacka (Tom Rees) about the bloody Poms and Italians that are pouring into the country. After all, tomorrow will be ANZAC Day, when Australia is solely for the Aussies! Wacka has heard it all before, but tolerantly listens. Alf’s long-suffering wife, Dot (Valerie Henry) arrives home with the shopping, only to find that not a single chore has been done in the house.

The group chatting in the kitchen don’t hear the arrival of university student, Hughie (Matt Randall), Dot and Alf’s son, arriving through the bay windows at the rear of the house. Hughie is with a fellow student, his girlfriend Jan (Carmen Miles), a young lady from the posh North Shore, certainly not Alf’s type.

The couple sit on the bed and discuss an idea for a controversial newspaper article that they have in mind, which is bound to cause family conflict.

The young, experienced director, Brendan Ellis, was very ably assisted by Hannah Moran. Every now and then there is a community play that comes close to faultless. It is obvious that this play has had a huge amount of work put into every aspect of the production. Christine Ellis’s set, with genuine furniture of the era, the paint colours – especially the arsenic green kitchen units, the old fashioned radios, an old range cooker and an oak dining room dresser. The lighting design by John Woolrych had just the correct hue to give that incandescent lamp feel to the settings; then there were small spots that just give that touch of isolation for certain brief monologues. The choice of music, Josh Lang, had the audience quietly joining in with Pat Boone and Perry Como. The tech operation was a little variable, with a couple of pre-empts and a missed light switch on. The costumes brought back memories and smiles, from Alf’s ill-fitting, double breasted demob suit to the ladies immaculate cotton dresses. The whole production smoothly supervised by stage manager Ruhama Geiger.

This whole production relied upon the subtlety of the acting showing a full grasp of the circumstances along with the old style family values. The result was exceptional; the actors often had tears in their eyes as the conflict grew. Five good, solid and moving performances.

Chris was outstanding as the drunken father and chemistry of the others created a truly believable group. Matt gave his best performance yet, superb as the son torn between his new love and misguided parents.

I have had a few comments recently that I am not harsh enough in my reviews. I actually aim to write reviews, not critiques. If something annoys me I will mention it, but my main aim is to give the potential patrons a basic summary of the storyline and an overall idea of the production quality.

This is NOT yet another ANZAC play, but a wonderful character study and a daring look at the ANZAC day celebrations. An excellent show by a dedicated and talented team – I hope Alan saw it from above.