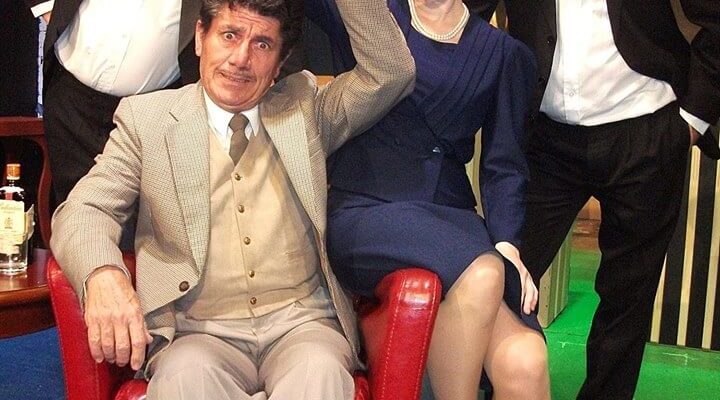 ‘The 39 Steps’ is a madcap parody based on the 1915 novel ‘The Thirty Nine Steps’ by Scottish author, John Buchan. Simon Corble and Nobby Dimon wrote this concept in 1995, receiving a $2,000 grant from the Yorkshire Council; it was designed to be seen in village halls. In 2005, Patrick Barlow then rewrote this play for four – very busy – actors. Although this version only premiered 10 years ago, it has circled the world, reaping numerous awards in the process.

The 1935 Hitchcock film was possibly one of the cinema’s first thrilling spy films; it was followed by the 1959 film starring Kenneth More, which was much softer in its approach. Now we have this VERY light-hearted, multi-award winning version, which is the fifth longest running London West End play and it had 771 performances on Broadway.

It is August 1935 in England and Scotland. The opening scene is Richard Hannay’s apartment, across the road from Broadcasting House in central London.

There are few flats or pieces of scenery but masses of nifty gadgets (Dave Browning); the whole effect is by well-chosen furniture and some ingenious props (designer Robert Benson-Parry, props Carryn McLean).

The costumes were numerous, from the exotic to the plain weird.

Wardrobe mistress, Joyce Gilbert, had to make many of the costumes capable of rapid change. The wardrobe team built plenty of humour into the costumes, with their good lateral thinking.

Handsome, suave Richard Hannay (Gino Catalado), the hero of the story, is sitting in his flat. After an awful day, he decides to relax by going to the theatre. Whilst watching a variety show, a foreign woman enters his box and takes a seat. She is Anna Schmidt (Emma Shaw), a mysterious woman who within minutes is wildly firing a pistol. Chased by the police, Hannay takes her back to his rooms.

Anna warns Hannay that she is being pursued by a secret agent who is trying to kill her. She points out of the window to the dark street below; two men (Gordon Park, Andrew Govey) in cream overcoats are staring back at the window – hired killers?

Hannay is hunted throughout the Highlands of Scotland, with some daring escapes. Will he ever find the truth about the ‘39 Steps’?

Director James Hough-Neilson certainly had his hands full. Although there were only four cast members to deal with, there were about 130 different roles, 100 sound effects (Pat McGinn) and about 120 lighting changes (Wally Fry). The follow spots (operated by Jordan Jensen, Caroline Kaye) gave a touch of the 1930s theatre atmosphere.

This style of play relies upon the rapid pace being maintained. The actors – not surprisingly with the amount of work – flagged slightly towards the end, but the stage crew (Pearl Jensen, Christine Smith, Dale Seaman, Karen Thompson, Susie Benson-Parry) led by Bronwyn Hammond and Polly Waugh were swift and well organised, good team work. There were many mechanical props that required operation, such as the names of the station flashing by and even the dagger in the dead woman’s back!

The four actors were outstanding, moving smoothly from one character to another. One language and accent to another – even one sex to another, often all in one brief cameo scene.

This play is certainly not for those who studied Buchan’s book for their school English; although the characters and the plot are true to the book, the production is a whacky show, verging on Monty Python and even pantomime at times. The audience loved it, with spontaneous applause regularly throughout. It is great fun, but like most of Limelight’s productions, the whole season was sold out before opening night.

If you wish to see the show, you will need to put your name down on the reserve or cancellation list. A good, solid, delightful production with everyone pulling their weight.