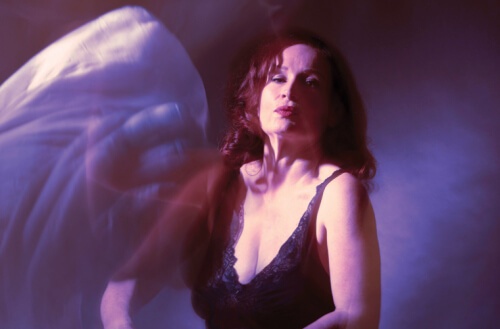 ‘The Cockatoos’ is a short story by Nobel laureate for literature, Patrick White; it has now been adapted for the stage by local, award winning playwright, Andrew Hale. This Happy Dagger Theatre production is supported by the Blue Room. Happy Dagger’s aim is to give the public something to think about, away from the trite entertainment that seems to fill our lives; they have received development funding from the Department of Culture and the Arts, with script development assistance from Stages WA.

This hour long World Premiere can be seen at the Blue Room Theatre, Perth Cultural Centre, 53 James Street, Northbridge at 7.00 each evening until 7th November.

The anteroom has a display of various items, central to the lives of some of the characters. The main auditorium is painted black, there is a swing hanging central stage; this also acts as a house window. There are a couple of other clever surprises (Set designer India Mehta). A great deal of the atmosphere was thanks to the inventive lighting by Tegan Evans.

The cast enter the stage one at a time, looking and chatting to the audience as though they were arriving to see the show. Then one of the cast starts to tell us about an 8 yr. old boy, Tim, who lived in the area about 1955, the austere period shortly after the Second World War. the year is now 1972.

Middle-aged Clyde (James Sollis) is about to leave for his house-to-house collection, on behalf of the Heart Foundation. His fawning wife (Janet Pettigrew) pins his badge of authority to his chest before he leaves.

Down the street he calls at the Daveron home, where the shy and nervous music teacher, Olive (Nichola Renton) gives a donation, however, Tim gets something more rewarding – special gossip about Olive’s Irish husband, salesman Mick (Andrew Hale). Next door to the Daveron’s home is the rather strange and bad tempered, Mr Figgis (Kingsley Judd).

In another house, Ms Le Cornu (Anna Brockway) spends most of her life dressed in her Japanese dressing gown. What can be her contribution to the street, and what is her dark secret?

Could the local wildlife be a true indication and reflection of how healthy the human lifestyle is in the street?

This wonderful tale of life in an Australian street has many similarities to Dylan’s ‘Under Milkwood’; with poetic passages and the interlinking of the complex characters. Andrew Hale, the director has developed the personalities beautifully, with some of the delightful and most experienced cast playing two or three different characters. These exceptional, richly observed occupants show us a full range of moods, traits and emotions.

The body language and the general finicky attitude of the street’s tenants, have been developed with clever choreography by Claudia Alessi. The action is fast moving and the pace breakneck at times. The treatment of a damaged cockatoo is guaranteed to raise the emotions.

The musical composition by Ash Gibson-Greig, and the soundscape from Will Slade are subtle and perfectly conceived, excelling in their understatement. Heavy handedness could easily have ruined the effect.

It is no surprise that Patrick White is Australia’s most respected writer, and this brilliant troupe have given us a magnificent rendering of his striking play.