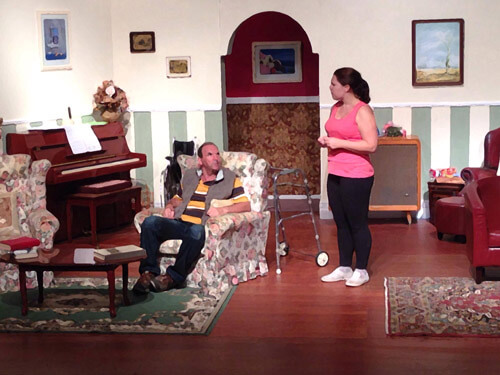 ‘Side Effects’ is a hilarious, Eric Chappell comedy that was published in 2012 when Chappell was 79. However, the script still well constructed and has a young twinkle to it. Lincolnshire born, Electricity Board auditor, Chappell wrote and co-wrote numerous TV sitcoms, the most successful being the BAFTA-winning ‘Rising Damp’, which was adapted from his stage play ‘The Banana Box’.

‘The Castle’ is famous for its high quality farces, with a slight change of genre, this very funny, light-hearted play was presented at the comfortable ‘Castle Theatre’, 8 Attwood Way, Rockingham until 12th April.

The curtain open to show miserable and moaning, middle-aged Frank Cook (David Heckingbottom), who has been booked into this rest home by his caring, but long-suffering wife, June (Nicole Brown) for respite – her respite. Into the room enters Paul Latimer (Rob Walker), a younger man who has just had a heart transplant.

When the men go into the garden for a chat, June starts talking about her husband’s numerous afflictions with Paul’s quiet wife, Sarah (Helen Brown, who stepped in at the last minute and was excellent). Straight-laced Sarah bemoans her husband’s new, inappropriate behaviour that started just after she saw him with the young and mysterious, Tracey (Claire Rose Ward).

Why is Tracey stalking poor Paul? Will June get her ‘old’ husband back?

Director Larraine Craig has directed numerous comedies at ‘The Castle’, most of them with her husband, David, in the main role. This pair really knows how to present comedy, and this has rubbed off on the rest of the cast. David’s speciality is creating ‘unintentional pandemonium’, and this play gave him plenty of opportunities.

The teamwork, timing, rapport and stiff upper lip delivery of the whole cast was wonderful. As certain props collapsed and another was unbecomingly employed, the laughs flowed forth. Stage managed by Stephanie Bell.

Sue Murray’s wardrobe selection ranged from the frumpy Frank, to the gypsy like outfits of Tracey. The teching by Ian Brown, who was in charge of both lights and sound, was very good.

Incidentally, this friendly theatre group is looking for all kinds of helpers, from ushers to actors. Yet another success from a well-established team, I look forward to their next production, TV’s famous ‘’Allo, ‘Allo’ in early August.