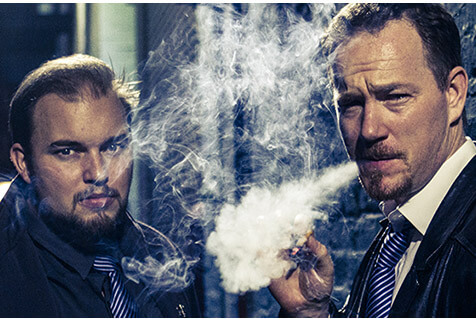 ‘The Pillowman’ is the blackest of black comedies, partly autobiographical; it was written by Martin McDonagh and, co-incidentally, premiered ten years ago at the Cottesloe Theatre in London. This ADULT play, crammed with dark humour, has received an Olivier Award for ‘Best New Play’, a New York Drama Critics’ Circle Award for ‘Best New Foreign Play’, a nomination the Evening Standard Award for ‘Best New Play’ and two Tony Awards. This incredible production is now being presented by a new Irish, independent theatre company, Endless Theatre at the Rehearsal Theatre, in the State Theatre Centre of WA, 174-176 William Street, Northbridge.

This brave, bold company was created by two of the ‘The Pillowman’ actors, uncovers new avenues of theatre, focusing on different techniques and physical theatre. In 2013, American-Irish actress and creative inspiration, Rebecca Virginia Williams, joined the group as their director.

The two and a half hour shows run nightly until Saturday 19th April at 8.00 pm.

The scene is an office in a police station, in an undemocratic country. There is a table and three chairs. The back ground consists of two, white translucent screens.

Seated on a chair, with a black bag over his head, is Katurian (Jordan Gallagher) a pleasant young writer, who has written a series of ghastly short stories that are supposedly fiction but have been found to have a vivid resemblance to murders of local children.

These three brutal murders are being investigated by the smiling Detective Tupolski (Garreth Bradshaw) whose mood can swing in a split second. His colleague is Detective Ariel (Bryn Coldrick) a sadistic thug who hates retarded people and paedophiles. On seeing the resemblance of the murders to the stories they decide to interrogate Katurian in their own thorough way.

Whilst searching Katurian’s house, they discover his introverted, mentally challenged brother, Michal (Kiefer Moriarty-Short). Katurian is devastated on finding out that Michal has been talked into confessing to the child murders and, despite being in custody is determined to come to his rescue. But will the detectives listen to him?

This is a beautifully constructed drama with precise dialogue that holds you on edge for the whole performance. The marvellous director is Rebecca Virginia Williams, who has brought the ‘brothers’ of the play over from Sligo in Ireland. Rebecca has also selected from our local talent, Bryn Coldrick – who was recently glorious in ‘The trial of Judas’ – and Garreth Bradshaw, one of WA’s best directors, to take the other two parts. Garreth managed to produce and retain a most acceptable Irish accent throughout.

There are two very powerful and demanding acts, but the whole cast kept up the pace and drama without faltering. There was convincing violence with some very threatening moments, but nothing that would stay with you and thanks to the finely blended humour, unlikely to cause sleepless nights. No doubt, the amazing performances would probably take the actors hours to unwind.

Costume designers, Leah Toyne and Amy Murray have given a great deal of thought to the costumes, dressing the two brothers simply, giving them a vulnerable appearance. Tupolski was in totally in black – shirt, suit and overcoat; Ariel was in a black leather jacket, this made the pair look like Nazis.

The white screens were used throughout to display the projected silhouettes of the characters depicted in Katurian’s stories as they were being related. This live art was by Nic Doig. The lighting was very well designed (Rebecca Thompson) with powerful spots at floor level to head height, this gave harsh dramatic shadows and, with the new LED lamps, the perfect colour tone. The sound design called for some unusual effects, but Drew Krapljanov conquered the challenge well.

This topic of this play looks horrendous, but with such a clever script and magnificent, well directed performances, this could well be the outstanding play of the year. All theatre students should see this play to let them know what true acting is all about. If you appreciate quality, try and get a ticket, but with only 80 tiered seats in the auditorium be quick. Outstanding.