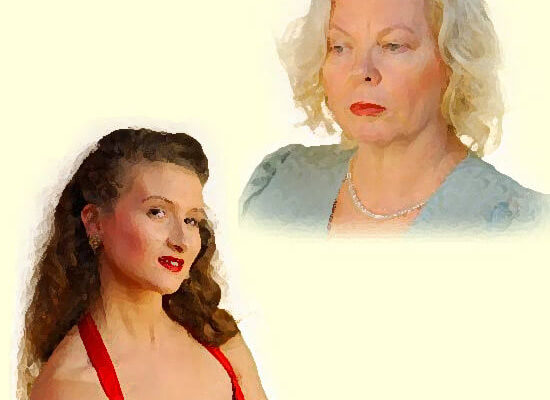 ‘Relative Values’ was written in 1950 by that quintessential Englishman, Noel Coward. Still considered as one of his best comedies, it was first staged in London in 1951 and ran for a full year. This fine production shows that the script is a little aged, with the odd funny quip about people from 60 years ago in England.

This 160-minute comedy can be seen at the Melville Theatre, on the corner of Stock Road and Canning Highway, Melville nightly on Thursday, Friday and Saturday nights at 8.00. The 20 minute interval is after 85 minutes, allowing the comedy to develop to its pinnacle in the second and third Acts.

The scene is the library of Marshwood House, a countryseat in Kent.

The set is possibly the most stunning that I have seen this year (designed and built by John, Anne and Sean Bullock, Jay Shaw, Alan Muir, Darren Goodison). It has quality antique furniture, a massive jarrah bookcase, an old-fashioned, carved fireplace and a set of patio doors. The trimmings were terrific and these even carried out through the French windows to the walled garden. Superb.

In the library, the butler and family retainer, Crestwell (Kim Taylor) is teaching the young maid, Alice (Juliett Greenock) the finer points of service. The lady of the House, Felicity, Countess of Marshwood is awaiting the imminent return of her son, Nigel (Sean Bullock) from his long trip to America. He is to be accompanied by his new fiancée, Miranda (Tatiana Dalin) an international film star.

The Countess (Susan Lynch) is talking with her young nephew, Peter (Darren Goodison) and dotty but loveable friend, Lady Cynthia (Geraldine Harrington). As the Countess is explaining what she has in mind for the couple’s future, the large, room doors open and personal maid, Mrs Moxton – Moxie (Sharon Greenock) enters. She is practically in tears, and explains that after two happy decades in service, for personal reasons she will have to leave.

The happy couple arrive at the mansion, with self-centred Miranda living the dream. Then, as the family are dining, a friend, Don (Cameron Leese) arrives causing tension in the house.

Tarryn Harris (nee Bullock) is quite new to directing, but one could assume that she has been directing for years. Coward has a particular style of his own that demands the highest skills to present – and even then, some feel that Coward’s result is aged and stuffy. Tarryn, however has cleverly managed to keep the style and rich characterisation, making the script much more acceptable.

The play gets off to a very slow start, taking almost quarter of an hour to flow. This due solely to the playwright’s garrulous and verbose script, despite being beautifully delivered by Kim Taylor. Susan Lynch was wonderful as the manipulating mother and Countess, but it was Sharon Greenock who excelled as the personal maid – she really lived the part.

The cast can be very proud, their hard work, well-rehearsed play paid off wonderfully.

The lighting design by Lars Jensen was well considered and controlled by Barbara Lovell. Michelle Sharp’s costumes were correct for the period and the ‘class’ of the character, when class played a major part of the storyline.

Still a very funny play, although it would benefit from losing 30 minutes. Even if you have seen it before, this production is well worth a trip out on a cold night.