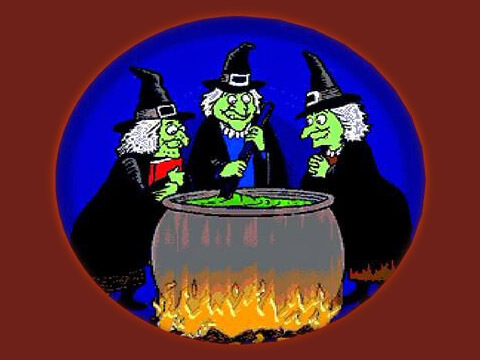 ‘The Farndale Avenue Housing Estate Townswomen’s Guild Dramatic Society’s Production of ‘Macbeth’’ must be one of the longest play titles ever. The comedy is written by English barrister, Walter Zerlin Jnr. with his co-writer, David McGillivray who have written a whole series based on the life in a community theatre group. The plays are zany, with a similar ‘stupid’ humour to the cinema’s ‘Carry On’ series.

This fine 90-minute production is being presented by the Darlington Theatre Players at the Marloo Theatre, Marloo Road, Greenmount on Wednesday, Friday and Saturday nights at 8.00 until Saturday 19th July.

Reflecting the (deliberate) amateur theme of the play, the rough-hewn set (built by John Hillan) comprises sandstone castle walls, with a series of arches across the rear of the stage. These arches face towards the rear of the stage, as the audience find themselves ‘on the stage’ watching the actors perform to their audience – the backcloth.

Pianist Gwynneth (Marjorie De Caux) warms up the audience with a burst of ‘The Sound of Music’ and ‘Tequila’, an unusual choice for ‘Macbeth’, but as we are to find out, nothing in a Farndale, play is usual.

Onto the stage strides Mrs Reece (Neroli Burton) the proud director of this production. This haughty thespian seems unaware of the true inadequacy of her cast and crew. She introduces the audience to a special guest; he is Mr Peach (Ray Egan), an adjudicator for a prestigious acting competition, who will oversee the play.

The curtains open, catching the stage hand, Henry (Rodney Stickells-Palmer) trying to organise the three witches (Alyssa Burton, Rachel Vonk, Taneal Thompson) who are late for their entrance. To make things worse, one of the witches has lost her voice. Then the stage manager, David (Richard Coleman) discovers that Lady Macbeth has called in sick, the performance has started; before he knew what had hit him, Henry was volunteered for the part.

The play progresses and we see Macbeth (Siobhan Vincent) witness an original entrance for the ghost of Banquo (Fi Livings).

How will Mr Peach see this theatrical disaster?

Gail Palmer, the director, and her assistant Marjorie De Caux have chosen a VERY difficult genre to produce. This series of comedies is famous for failing and being un-funny, but Gail has captured the subtleties of the style and skilfully directed her talented cast to give a very dry, humour filled performance. The blunderings are perfectly carried out, appearing as accidents and NOT with the boom-boom calamities of a pantomime. To make such chaos succeed, every member of the cast must capture their very different personalities and appear to go their own separate ways – this every member did, flawlessly.

The techs have their ‘mistakes’ down to a split second, with sound effects (Greg Rusha) and lighting (Michael Hart) cues out of sync. The costume girls (Marjorie De Caux and Sallie Ketteringham) and the props arrangers had their work really cut out. The costumes were varied and unusual, the props weird and wonderful, but both gave the audience plenty of laughs. Stage managers, David Bain and George Boyd, had several crazy moments operating the strange props.

This play may not be everyone’s type of humour, but it will win your admiration. To make anything, whether magic, slapstick or blundering look unrehearsed, it requires a huge amount of practice; this team were at their very best when delivering the laughs.