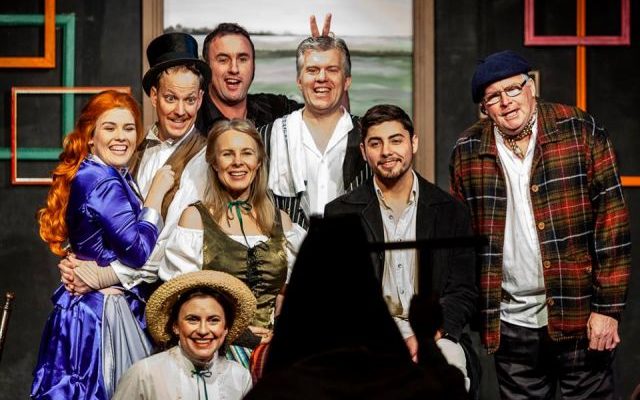 ‘Picasso at the Lapin Agile’, a comedy written in 1993, was the first full-length play by American absurdist comedian, Steve Martin. Stephen Glenn Martin’s father was proud but critical, so in his teens Steve’s feelings were mostly of hatred. Martin’s first job was at Disneyland, where he perfected his talents for magic, juggling, and creating balloon animals.

Martin married twice, becoming a father (a daughter) for the first time at the age of 67. A keen art collector, he sold a painting at Sotheby’s for $26.8 million. Already having an Emmy and a Grammy Award for Best Bluegrass Album for his banjo playing, he was awarded an honorary Oscar in 2013.

The first reading of this play was at Martin’s home, with Tom Hanks reading the role of Pablo Picasso. Martin then first work-shopped his play at the Malthouse in Melbourne.

This hilarious 80-minute play (no interval) can be seen at KADS Theatre, Historic Village, Barber Street in Kalamunda. Season runs until the 8th August with shows on Wednesday, Friday and Saturday evenings at 8.00 pm.

For half an hour before each performance the Black Chooks, a group of a dozen ‘French’ musicians playing guitars, violins, accordions, a concertina and woodwind instruments combine to give a superb French flavour to the evening. A true highlight.

The scene is 1904 in a trendy bar in Montmartre, Paris, the ‘Lapin Agile’ (nimble rabbit). The walls are black and a dozen empty picture frames of varying size and colour hang on the wall. There is a bar and small tables with chairs (design Cicely Binford, built by Barry Carpenter). A large painting of a country scene with sheep in a field hangs above the bar (artwork by Andrea Berry).

There was a very good front of house display by Bill and rose Weighell.

The dim barman, Freddy (Jason Millman) is serving and chatting to his prostate challenged customer, old Gaston (Adrian Lewis), when into the bar walks Albert Einstein (Lachlan Stewart – excellent) a scientist in his mid-twenties. Albert has a date with a woman, and although he had arranged to meet her elsewhere, he has decided to wait in this tavern in case she got lost. Such is his lateral thinking.

Freddy’s hot-blooded partner, Germaine (Sherryl Spencer) arrives late to help in the bar, but she is more interested in having an active love life and what the 20th century holds for her. Close behind her is young innocent, Suzanne (Naoimh Healy), with heart pounding, she is searching for the man who recently painted her, the egotistical Picasso (Nic Alexander). Seated in the bar is an avaricious businessman, a top art dealer, Sagot (John Bevan), who is making a fortune from Pablo’s work.

With the sciences and art genres covered, a flash conman, entrepreneur and inventor, Schmendiman (Gareth Sambridge) annoyingly interrupts the calm. Into the bar bursts a red-hot Countess (Nicola Chapman), she has a wonderful mathematical brain, so on seeing Albert finds his work sexually arousing; she grabs him by the tie and drags him off to teach him a new theory on mass, energy and motion.

Yet another virtuous admirer (Carmen Miles) enters the bar seeking the man of her dreams.

The bar blacks out and a messenger (Alex Jones) ‘a musician from the future’ arrives. Will he save the day? Who will win the talent battle, the scientist or the artist?

I have never been a fan of Steve Martin, often finding his humour stupid or delivered with a total lack of finesse, so I was not looking forward to seeing this play. However, when half a dozen friends strongly recommended it, I decided to make the 45-minute journey each way – and I am so pleased that I did.

Martin’s script was very funny, beautifully constructed with plenty of subtle asides and filled with whimsical nonsense. The audience laughed aloud throughout the play at the rich characters and their strange habits.

The actors all had accents, there was German, French, Spanish and English which must have been very difficult to retain when talking to another person with a different brogue. Many of the cast were relatively new to the stage, but one would never have guessed as they boldly delivered their lines with assurance.

With a small stage and a reasonably large cast, it can be difficult to keep the movement interesting, but this wonderful cast threw everything into their performances and created the required riotous atmosphere perfectly. The interaction and energy was magnificent, the cast just glowed.

Congratulations to KADS on your bright, easy to use, new website. Please also promote your shows in ‘Footlights’ on the ita.org.au website, – it is FREE – where everyone can see what is on each day, rather than having to search every venue (there are dozens of community theatres in Perth area) individually.

Congratulations to director Tim Edwards on this, his third production of this play. Great fun and well worth seeing. With the Black Chook music and the professionalism of the play, a really good night out.