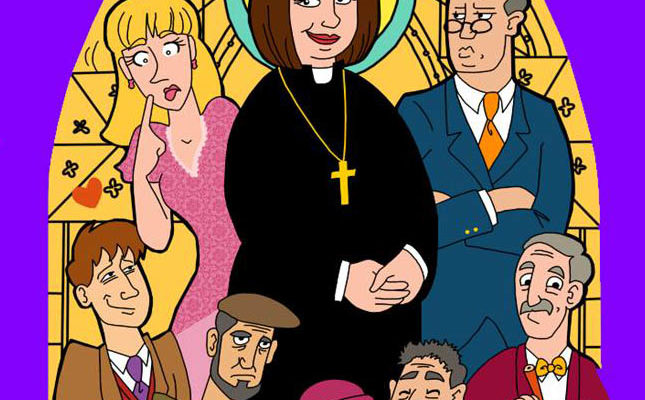 ‘The Vicar of Dibley’ was a BBC television sitcom created by Richard Curtis and Paul Mayhew-Archer; they based it around the experiences of the Reverend Joy Carroll, one of England’s first female priests after the ‘reformation’ in 1992.

This hilarious show is a combination of three TV episodes, ‘The Arrival’, ‘Love and Marriage’ and ‘The Easter Bunny’. In its 13 years on TV, it won multiple British Academy Television Awards.

Two snippets: Emma Chambers, who played Alice, won comedy actress of the year. Trevor Peacock, the mad Jim Trott, penned Herman’s Hermits big 1960’s hit ‘Mrs Brown You’ve Got a Lovely Daughter’, along with many other songs for Joe Brown, Adam Faith and Billy Fury – no, no, no, no, yes he did!

This Rockingham Theatre Company’s production can be seen at the theatre of comedy, The Castle Theatre, 8 Attwood Way, Rockingham, with weekend shows at 8.00 pm; it runs until 29th August.

The scene is Dibley, a small village in Oxfordshire. The stage was divided in two (set design Larraine Craig, David Heckingbottom), with one-half ‘the vicarage’ and the other was ‘the village hall’ for council meetings. The sets, as always, were top quality built by the cast, Peter Scarrott and Nancy Soroka. Simple props represented the church and Leticia’s bedroom, but with good, well-planned lighting and sound (Jackie Hiscox, Beth Haigh), the minor venues became realistic and convincing.

The curtains open to show the church congregation being led by the Rev Pottle (Steve Hall) who collapses. His incompetent verger, Alice (Natasha Birch) checks his pulse, but the poor man has died.

A couple of weeks later, the Chairman of the Parish Council, David Horton (Danny Joyce) has his welcoming committee gathered in his sitting room, awaiting the arrival of the replacement vicar. The doorbell rings, David’s wimpy son Hugo (Callon Leam) answers the door, and to his father’s horror, a female vicar enters. She is the attractive Rev. Geraldine Granger (Larraine Craig).

The senile and confused, Jim Trott (Rob Walker) welcomes the vicar with his own inimitable style. Church organist, Letitia Cropley (Helen Clark) rushes forward with a plate of her unique sandwiches, but is pushed aside by farmer Owen (Ian Spencer) who wants to check Geraldine’s udders. The longwinded, pedantic, council secretary, Frank (Terry Winter) starts his garrulous welcoming speech.

Later Geraldine finds that not all of the Hortons are the same, in fact cousin Simon (David Heckingbottom) is ‘quite dishy’. The vicar then has a major upset at one of her first services, with the angry shouting of a strange woman (Lorraine Howes).

When an audience goes to see a play based on a well-known TV series, the expectation of seeing the ‘real’ characters is often unfair, but I know that this show satisfied even the hardest theatregoer. Three of the characters, the vicar, old Jim Trott and Frank Pickle were truly magnificent clones of the original. The rest of the cast must also have put in hours of rehearsal, talking to themselves in front of a mirror, as their mannerisms and facial expressions were superb. The actors’ perfect accents and diction ranged from Alice’s nasal lugubrious delivery, to Owen’s monotonous drawl.

A TV production has the luxury of editing, cutting rapidly from one venue to the next. On stage, this can often mean a set or costume change, and even though this stage crew (Samuel Taylor aided by Tegan Joyce, Jayden Fern, Lorraine Howes) were splendid in both speed and silence, the flow staggered a little. Rather than have a simple blackout, the village yokel changed a sign on an easel, informing us of the next location; in his own quirky way, this helped keep the audience ‘warmed up’ instead of a crippling, simple blackout.

The costumes were many and varied, from the dignified ministerial garb, to Alice’s cookie wedding dress and her zany animated blouse – all the hard work of the dedicated costumiers, Steve and Lara Hall.

Such is the success of this show that all houses have sold out, so two extra nights have been released! As always, ‘The Castle’ under the talented directorship of David Heckingbottom, has given us another professional and hilarious show. Try to catch it.