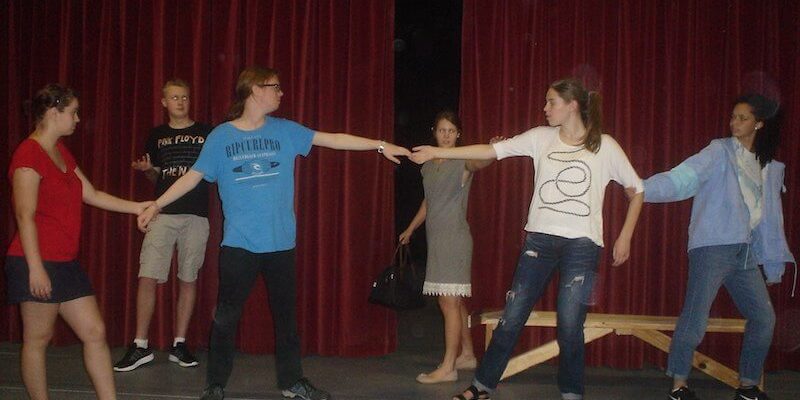 ‘Midsummer Mix’ is a bright season of three very different plays by a group of the finest local writers. It is being presented by the Stirling Players, at the Stirling Theatre, Morris Place in Innaloo.

The three-hour performances can be seen nightly at 8.00 until Saturday 28th January, with a matinée on Sunday 29 at 2.00 pm.

‘Lives that are Parallel’ this quirky romance is approx. 65 minutes. It was written by James Forte and directed by Fran Gordon, with assistance from James Forte.

James spent a year with the select Black Swan Emerging Writers Group, and this has helped him develop a tight script with a natural dialogue. This storyline is novel, several well-developed story threads, and very relevant to today’s youngsters.

The LA airport announcer (Calvin Payne) asks passengers not to leave their cases unattended. A group of girls on a sports tour are rushing through the crowds, when one, Sacha (Lily Baitup) literally bumps into a group of Aussies boys on their way home. As one of the lads, William (Steve Anderson) picks himself up, he locks eyes with Sacha. They seem to become spellbound with each other. Sacha’s friends, Hannah (Tanzyn Crawford) along with the bossy team captain, Helga (Crystal Dawson) grab her, dragging Hannah off to the plane.

Back at home, his friend Tim (Samuel Jones) is mocking William, who is still in a dream. His girlfriend, Gailene (Sara Burke) is annoyed about her mysterious competition. Desperate, William pesters his sister Jane (Chanice Edmonds) to help him trace this fleeting angel.

A tricky situation to make believable, and with a couple of ethereal scenes I was starting to have doubts, however, with clever writing, good acting and strong direction the final result felt perfectly plausible.

A minor weakness is that the characters are all, by necessity, very similar in age and personality. It might be worth developing a real ratbag or madcap individual. Solid performances from the two leads.

Most unusual and enjoyable.

‘The Bright Side of Life’. This touching comedy was 55 minutes long. Written and directed by Siobhán Wright, and the assistant director being Denice Byrne.

Written by all-round, theatrical enthusiast, Siobhán Wright, the dialogue is exceptional and delivered by a well-chosen cast. This was Siobhán’s first time directing, and was most admirable.

The scene is the lounge of an old folk’s home in Dublin. A semi-circle of armchairs and numerous props (Melissa Skeffington) ensured an authentic look.

The nurse (Siobhán Wright, alternating with Denice Byrne) welcomes Kathleen (Claire Westheimer) to the old folks’ home. Her son Paul (Ken Ratcliffe) explains to his Mum that she will only be there for a couple of weeks, whilst he fixes up a Granny Flat.

Kathleen is then introduced to a strange mixture of ‘inmates’, such as Betty (Julie Holmshaw – great) – a severe hypochondriac, and poor Annie (Karin Staflund) who spends her day cuddling a doll. Then there is the bright and sparkling Mona (Clare Wilson – well done) who loves to share the highlights of her better days.

Quietly knitting the most repulsive jumpers, is Magser (Marian Byrne – delightful). She still has all of her screws; she needs to be alert when her money-grabbing daughter, Frankie (Kathleen Alloway) and son Jason (James Donnelly) call around. The only highlight of the week is when the occupational therapist, Oliver (Paddy McAuley), comes to give them ‘yoga’ lessons.

When young GP, Bella (Melissa Skeffington) visits, she learns more than she expects from this strange mix of residents.

I know that the gay character was meant to be comical relief, but he was so far over the top (the actor performed well to the direction and script) that he became an annoying caricature. Even the most ‘sheltered’ audience member would get the message and still raise a smile, with just a subtle hint.

This was still a beautiful play, plenty of humour; well-observed characters brought to life with great acting, and topped with good dialogue. It brought a tear to a few eyes; one could hear the tissues coming out. Well done.

‘Being Juliet’ a cleverly written, 55-minute romantic comedy, from playwright Yvette Wall and is directed by Carol Hughes.

Yvette has won many writing awards, and is not frightened to try something new. I consider Yvette to be one of WA’s top three writers. This clever script included a few different writing styles and acting genres, with numerous hilarious misquotes (deliberate) from Shakespeare.

The stage manager (Ryan Taaffe) calls for the actors to take their opening positions.

The fairy, Lillian (Jenni Glassford) notices that young Brenda (Yvonne Lingua) is looking depressed. Brenda feels that in spite of all her hard work, brassy Tina (Sue Murray) seems to get all of the better parts, whilst she – Brenda – is constantly over looked.

Will Brenda get a chance to blossom? Or is she doomed to being the understudy forever?

I loved the concept, there were several unexpected twists and it was most enjoyable, however, it sadly this did not quite satisfy or work for me. I appreciate that the ’troupe’ were meant to be an incongruent shambles, but perhaps the characters were a little too diverse, with the result that none of them quite melded at any stage. I am sure that a few tweaks are all this clever writing requires.

For all three plays, the effective lighting design was by Ian Wilson and John Woolrych, and smoothly operated by Carole Wilson.

One or two of the younger actors did not realise how the black drapes absorb their voices. A little more projection and a slightly slower delivery can help overcome this problem.

The three plays had a total performance time of 3 hours. Although very different and well presented, three hours (including the two intervals) is a little long. This however did not stop this play’s run from having many full houses.

A most enjoyable night out with three solid presentations, topped with a warm welcome.