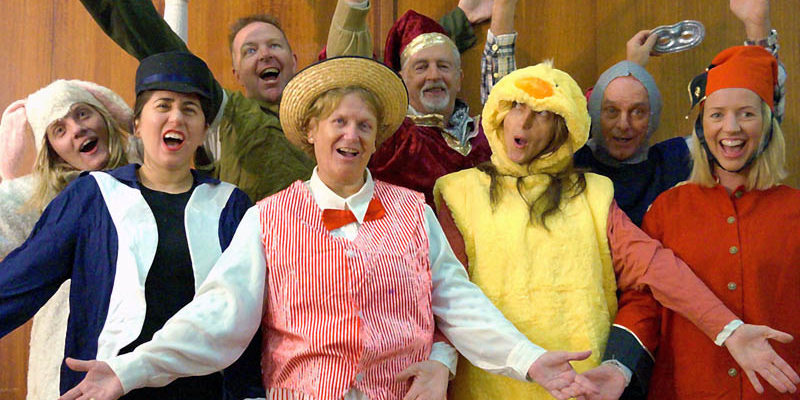 The producers of the play, ARENAarts, have already brought us half a dozen wonderfully colourful and thrilling Pratchett stage plays over the past few years. This tongue-in-cheek story – ‘comedy theatre production of operatic proportions’ – is loosely based on the ‘Phantom of the Opera’ musical. Like most of Pratchett’s stage plays, the book was adapted for the stage by Stephen Briggs, and the director has further modified this (slightly).

As a child, Terry was desperate to be an astronomer, writing his first spooky, astral story for his school magazine in 1961, aged 13! His first children’s novel, written and illustrated by Terry, followed 10 years later when he was a journalist. He gave up an excellent job to become a full time author in 1987 and by 1996; he was the top selling author. Pratchett’s books are filled with suspense and humour. Writing 2 books a year, ‘Maskerade’ was the eighteenth of the forty novels in the Discworld series, and the fifth witches’ story.

Multi-award-winning Pratchett was second only to J. K. Rowling, selling 2.5 million books in the UK alone, and more than 85 million books worldwide, in 37 languages.

After being knighted, Pratchett thought it only correct that he should make his own sword – this he did from ore he dug himself, blended with meteor ore. He gained nine honorary degrees, but after suffering from Alzheimer’s for 7 years – not the stroke he was thought to have had – he died in March this year. Admired by Margaret Atwood and George R. R. Martin, only four years before his death, Pratchett had the third fastest selling adult hardback in history – dictated to a friend as he had lost his writing skills.

He gave a million dollars to the Alzheimer’s Foundation.

The two and a half hour fun performances – which cost only the price of a cinema ticket – are brought to life by ARENAarts each Thursday, Friday and Saturday night (Sunday matinees), curtain up at 8.00 pm in The Latvian Centre (LC Theatre), 60 Cleaver Terrace, Belmont – just off the Great Eastern Highway. Plenty of free parking. The season runs until Saturday 18th June.

The stage has a 60 cms raised area at the rear, giving two very effective performance levels. The scenery was fairly simple (designer Simon James) but there were a great number of interesting props supplied by Linda Redman, who, along with Chris Ellis and Rachel McCann also provided the quality costumes.

The director employed several areas of the stage, moving the attention of the audience with his clever lighting design – operated by Gordon Johnson (no relation, this tech has class) – this kept the pace moving very well with the minimum stagehand interruptions. The stage manager was Linda Redman, efficiently aided by Janet and Callum Vinsen.

The show opens with a powerful welcoming speech by a Teller (Callum Vinsen), who sets the scene.

We join Granny Esme Weatherwax (Ursula Johnson), an obsessive and self-centred witch, sitting on the blasted heath. Seated next to her at the small fire, is her dizzy witch friend, Nanny Ogg (Julie Holmshaw).  They are searching for a third witch to join their coven and have in mind, Agnes X. Nitt (Joanne Williams), but she has ambitions to become a famous opera singer. Adopting the stage name of Perdita, Agnes goes to the local Ankh-Morpork Opera House owned by Mr Seldom Bucket (Michael Lamont) and asks for a part in the next show.

The house manager, Salzella (Robert Whitehead) has already chosen an attractive lead singer, Christine (Emily Theseira) who is full of her own importance, but untalented as a vocalist. Musical director, Herr Undershaft (Johan Smit) decides to use Perdita voice to sing along to Christine’s movements. As the audition takes place, Pounder, the rat catcher (Penny Phillips) and Walter Plinge, the young janitor (Sarah Christiner) weave in and out of the three ballet stars, Giselle, Solange and Collette (Lily Bailup, Riti Smith and Rachel McCann) as they rehearse their routines.

Soon, random corpses start appearing; have they been murdered? Then the witches find that the Opera House is haunted, so decide to investigate the mysterious deaths. They come face to face with a threatening thief (Elizabeth Meath) and the production manager, André (Brendan Ellis) is acting strange. Could the murderer possibly be the innocent scenery painter, Mr Cripps (Donald Weaver) or stagehand, Amo (Ned Wolf)?

Director Simon James has been bringing joy to the Perth audiences for 30 years, winning many awards on the way for his directing, acting and set designs. This is Simon’s sixth Pratchett play, and he has regathered his regular team for this show. When you have a great cast, stick to them.

This troupe was superb, not a weak link anywhere, they had pace, empathy, good comedic delivery – even the ballet dancers brought a big smile with their subtle, fun movements. The script was like that of a pantomime, plenty of one-liners and written on two levels, one for the young audience (this show would suit 10 years and above) and the ‘mature’ double-entendre jokes for the parents.

With a larger cast, one often spots the daydreamers who are not too sure what is going on, here the cast were word perfect, attentive and moved beautifully.

Special mention should go to the two witches, Perdita and Christine who were magnificent; however, from Opera House owner down to the rat catcher and Walter, the cast were exceptional.

A very funny show, with plenty of dry humour and the odd reference to well-known phrases from the cinema. A reasonably priced, most professional, fun night out.