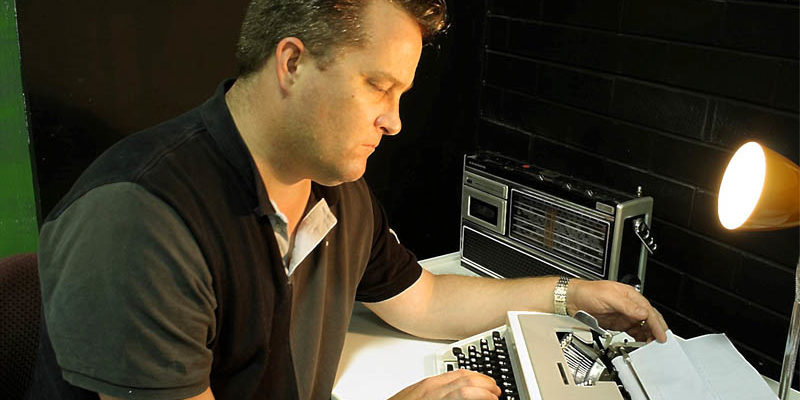 ‘The Real Thing’ was written by Tom Stoppard in 1983. It won several awards for ‘Best Play’, and then recently a Tony for ‘Best Revival’. This production, managed by Seanne Sparrow, is being presented by the Graduate Dramatic Society (GRADS) at the Stirling Theatre, with curtain up at 7.30 pm on Thursday, Friday and Saturday nights until 4th July, with a 2.00 pm matinee on the 28th June.

It is 1982 in the London apartment of Max and Charlotte. The set is well constructed and perfectly furnished. As the play progresses, two major scenery flats forming the rear wall swing back to allow the scene to be converted to another venue and other era. This was quite an undertaking for the substantial stage crew, but the stage management (Bronwyn Hammond – assisted by Neale Paterson) had the moves very well planned, and the designer really did ‘change’ the location.

The curtains open to show Max (Neil Cartmell) anxiously awaiting the return of his actress wife, Charlotte (Maree Grayden) from an overseas business trip. When she does arrive home, an argument ensues. When the next scene opens, Charlotte is now married to a scriptwriter, Henry (originally played by Ewan McGregor, but he couldn’t come, so they got Peter Clark), and as they are preparing the evening meal, the doorbell rings and in walks Max with his ‘new’ actress wife, Annie (Bethwyn Legg). It becomes obvious that Max and Charlotte in the first scene were actually an invention of the playwright, Henry; with the characters actually based on Henry and Charlotte’s friends.

Charlotte complains that the women in Henry’s scripts are written as bimbos, in order for Henry to express his misogynistic feelings through his affable character ‘Max’. However, it is probably the fact that Charlotte sees Henry’s cast member, Annie, as the person she used to be.

Henry starts writing scripts for television, and in one ghost written episode, Annie announces to Henry that she is visiting Brodie (Alex Ripper), a rebel in her play; but could this actually be an invitation for some hanky panky? On the train north, Annie regularly meets Billy (Patrick Barton), another actor half her age – a further opportunity for Henry to use his imagination and writing skills.

Henry is happy creating these immoral characters, but the lifestyle of his real-life, young daughter Debbie (Melissa Kiiveri) and her attitude to monogamy is a major worry to him. Soon Henry is ‘living out’ his creations, just as Stoppard did in his life, with his alimony and affairs.

This is a very tricky play to direct, as the actors glide seamlessly between fantasy and reality, however, with an experienced director like Barry Park it works well, clearly showing the fun and sense of abandonment equally well. Stoppard’s plays are often absurdist, but this story is filled with the lives of real people that we will all know in the theatre, their honesty, dedication and loyalty.

The lighting (Fiona Reid) and sound effects (Guido Nigro) were both well-conceived, and smoothly operated. Jennifer Prosser’s costumes were as always well designed and gave an instant recognition of the actor’s personality.

If ever an accent is called for, but an actor cannot manage it comfortably, and after some intonation training it is still no better, then it is wise to look at the actor’s part and decide if the brogue is really necessary. If not, then drop the twang altogether. A poor accent can at the least be most distracting, and at worst spoil a faultless play. Sadly, one accent was possibly the worst I have heard in some time; please, just play it straight. This is no reflection upon the actual acting, which like all of the others in this experienced cast, was well above average.

This is very well directed and produced play. It is a tricky play that only a talented cast – like this – could achieve; any less gifted and the whole play would have fallen over in an incomprehensible heap.

Once again, another full house, for a famous play, by a skilled troupe. Congratulations.