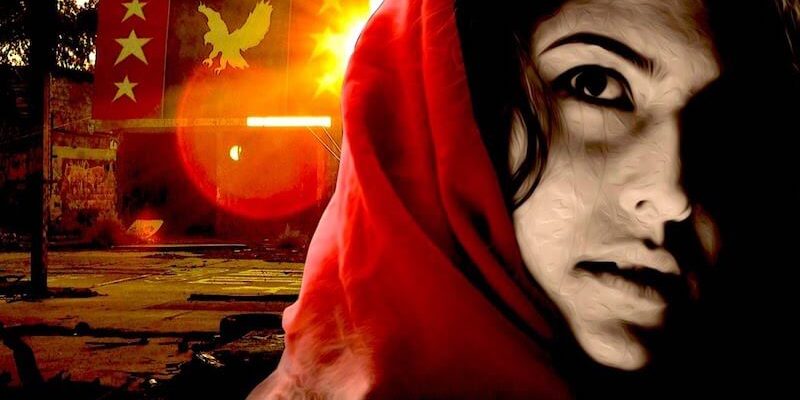 ‘Little Raven’ is not a theatre production, but it is an independent, short WA film, starring WA actors and it was written by Albany born, Scott Majidi. The film is produced by Cadell Shalders and Kai Yap, the executive producer was Glen Stasiuk.

This 14-minute presentation was a special (private) premiere screening of this Apex Blue film at Studio 411 within Murdoch University on Thursday 15th December. There were two screenings, one at 5.30 the second at 7.00 pm.

The scene is the present day in an English-speaking country, one that has enjoyed freedom and happiness for centuries. Now the regime has taken over, and even people’s simple rights have vanished overnight. Any enjoyment or education of women must suffer the consequences.

A young teacher, Mellori (as a child – Charlize Rebelo, adult – Dailin Manning) has dedicated herself to advancing the lives of street children. When a representative of the corrupt authorities (Paul Davey) calls at the mother’s (Charlotte Matilda-Weber) house, and then the local school. They must take away her students (Ava Gillies, Dailin Manning, Noah D’annunzio, Lilas Areias Da Mata) to be trained for their military.

The soldiers are heartless and Mellori finds herself helpless, thank goodness, she has her brother (youngster – Rohan Eshraghi, as an adult – Anthony Smith) for support, who has just walked back into her life after 10 years, but he seems to have changed.

The film’s music comprised of the ‘Raven Lullaby’ that was composed by Scott Majidi, and performed by Dailin Manning; along with the ‘Project Phoenix’  played by the Secession was used in the trailer. The resultant background music was perfect for the speed and action of each scene.

The photography angles, frame composition and depth of field were carefully used to excellent effect. The video was skilfully edited – I only saw one ‘mistake’ – with just the right length of shots to build up the suspense.

Other techniques such as using monochrome and solarisation added to the disturbing situation. The director, Scott Majidi, can be proud of his storyline, quality of shooting and all the support from his actors and crew. Short in length but he still managed to create real empathy. An admirable amateur WA film.