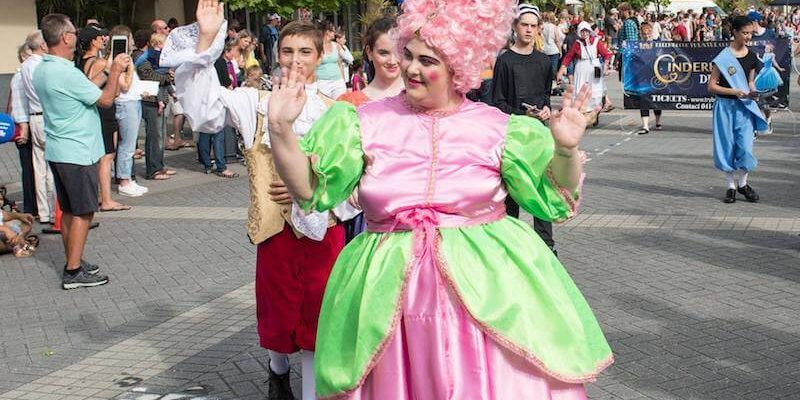 ‘Cinderella …. The Pantomime’ is a lively and colourful pantomime written by UK pantomime writer David Maughan, and sponsored by the City of Swan, the Ellenbrook Cultural Foundation and Healthway.

This 2-hour Ellenbrook Theatre Company’s spectacle can be seen at the Ellenbrook Performing Arts Centre, 100 Main Street, Ellenbrook on Sunday, 18th December at 2.30 pm and 7.30 pm, as well as Monday, Tuesday and Wednesday at 7.30 pm.

All credit to the City of Swan for sponsoring this – one of only two  – Perth Christmas pantomimes.

The sets are stunning. The flats are book style, being hinged in the middle this allows them to be turned over for a set change. The artwork on the 5 massive flats is exceptional. The village green, the kitchen, Palace Garden, the woodland glade, and the ballroom, each truly a work of art in its own right. Bright attractive colours, perfect perspective and crammed with detail. Set painting by Stacy Gardoll. Her company, The Painted Room do murals and art designs for the home.

Many unusual props, such as truncheons and glass slippers were sourced by Ian Howard, Brian Harris, Bryony Oliver, Jordan Lenihan and Suzanne Perry. The complex show was smoothly stage managed by Guy Jackson.

The sound and lighting design was by Mark Turnbull. It was exciting and most professional.

The makeup was clever and bright thanks to Jan Oliver, Sylvia Guest and Jasmin Lenihan.

The numerous colourful and unusual costumes were designed by Jan Oliver (of Masquerade costumes) and very well made with the help of Bryony Oliver and Nicky Stewart.

The whole production was supervised by Jan Oliver – a massive amount of work.

In a forest, we meet a Fairy Godmother (Sabrina Davies) and her young assistant (Ruby Oliver). They explain in rhyme, and with heavenly singing, what is happening at the Palace. As they finish, a local thief, Burglar Bill (Damion Brown) is pursued through the wood by the town’s incompetent police force – PC99 (Alex Griffin) and Sergeant Letsby-Avenue (Lyndsey Turner).

We see a young girl in tatty clothes, she is Cinderella (Emily Schinkel) helping an old lady pick up sticks for her fire. What Cinderella doesn’t know is, that the old woman is the Fairy Godmother in disguise. The fairy gives Cinders a magic token, a star.

Walking through the woods comes Prince Charming (Jordan Lenihan) and his reliable servant, Dandini (Lloyd Matias). The Prince falls in love with the peasant girl and so gives her a ticket to the Royal Ball. However, Cinderella’s cruel stepmother, the Baroness (Meredith Corr), has forced this daughter of her new husband, the Baron (Peter Boylen) to do all the housework. So, poor Cinderella’s only friend is Buttons (Bryony Oliver); her two ugly, loud and hideous stepsisters, Gwyneth (Giordarna Rigoli) and Gwendolyn (Rebecca McRae) are desperate for a husband, but have no quality and absolutely no chance of success.

What will happen next?

I often feel that the word ‘Chorus’ can suggest that the remaining characters in a pantomime were just hangers-on. Far from it, here every dancer, even the tiniest had tremendous stage presence, and carried out the dance routines – Gangnam, tap, several very different styles – with smiling confidence. They were Jasmin Pradhan, Kaitlin Pradhan, Kasey Burgess, Breannah Rigoli, Letisha O’Neill, Charli Crouch, Ebony Crouch, Hollie Burgess, Jordan Reith and Madison Reith.

The print artwork, the poster and programme (Sean Breadsell of Immaculate Photography) were of the highest quality.

Director Chris McRae has gathered a wonderful, keen and talented cast. Many of the young cast members could have a real future on the stage. Chris has given us a sing-a-long, great music and just a delightful fun show. The choreographer – and colourful sunflower – Shirelle Burgess, with the aid of the dance captains, Max Hughes and that terrific dancing Christmas tree, Renae O’Neill, has trained the youths (aged from 8 to 17) to an incredible standard.

Ugly sisters – boo hiss – were terrific. They communicated with the audience wonderfully. In fact I am fixed up with one for later in the week.

The super Baroness had a wonderful air of grandeur and dominance, putting fear into the audience (well slightly – there was nothing truly frightening).

The Fairy Godmother, Sabrina Davies is a professional star and has happily given her time to this wonderful cause.

Ellenbrook is one of the few community theatres that can produce a professional looking show every time. Another solid success – but are there any tickets left?