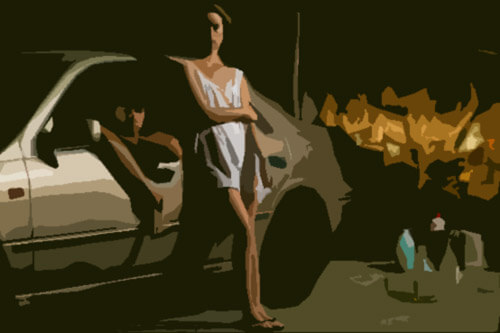 ‘Giving up the Ghosts’ is a beautifully structured thriller from young WA writer, Sarah Young. Sarah, who was a WAAPA student, has created an unusual, creepy and tense Play. Sandi Buckley’s ‘Owl Productions’ is presenting this dark comedy-drama, based on an actual true story, at The Blue Room Studio, at 53 James Street, Northbridge. The 60-minute performance runs nightly at 8.30 until 12th July.

The simple, but most effective set (designer Sara Nives Chirichilli) is totally painted black. In a corner a massive, oak-like tree climbs the wall. Under its branches sits an old ‘car’ – represented by two tatty car seats. The floor is strewn with dry leaves. The lighting by Joe Lui employed small spots and tiny floods, with a rainbow of colours carefully considered and controlled. Magnificent visual effects.

An extremely nervous and tense young woman, smartly dressed in a pink cable knit cardigan and beige slacks, is sitting in the car. This is Ruth (Georgia King). She checks her watch, then looks deep into the forest but whoever she is looking for is not in sight.

She is on the verge of panicking when a well-built man in his twenties, Steve (Paul Grabovac) strolls next to the car. He has been lost in the woods and couldn’t find his way. Despite being pleased to see Steve, Ruth is obviously worried by is presence. It turns out that they have only met on the internet and that this is actually their first face-to-face meeting.

Why has Ruth arranged this meeting out in the wilderness?

From the very first minute Georgia King starts to build up the tension and the enigma of the situation. Paul Grabovac is the perfect bouncing board. He gives a wonderful air of fun and ease in contrast to the neurotic behaviour of the young woman. The script was superbly written, but Joe Lui’s handling and direction the tempo and mood was made to oscillate. One minute there was sympathy, then tension and worry, followed by one or two real belly laughs.

The hour passed quickly with not a second dragging, the audience just sat there in total silence and anticipation of what would happen next. An intelligent play perfectly acted.