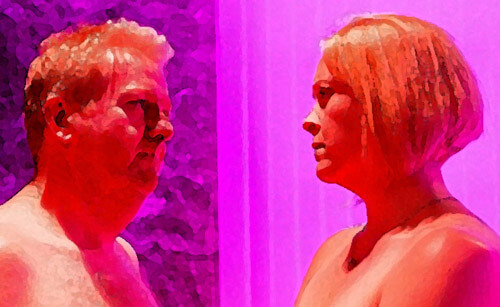 ‘Eight Gigabytes of Hard-core Pornography’ is a wonderful piece of writing by 27-year-old, Melbourne-based playwright, Declan Greene. It won him the 2012 Max Afford Playwrights’ $20 000 Award for young playwrights, plus a place with the creative development section at the Play Writing Australia’s, National Script Workshop.

This 90-minute co-production is by the Griffin Theatre Company with the Perth Theatre Company, in conjunction with the presenting partner, the City of Perth’s Winter Arts Season. This mesmerising play can be seen at the Studio Underground theatre, in the State Theatre Centre of WA, Northbridge nightly at 7.30 until 12th July.

Designer, Marg Horwell’s setting is simple but most effective. It consists of a huge, cream shag-pile carpet with two wooden, kitchen chairs. The background is a wall of white vertical blinds that are brought to life by lighting designer, Matthew Marshall’s colourful illumination. The scene was rounded off by composer Rachael Dease’s delicate music.

The two actors are pacing around the stage as the theatre fills.

A voice over says ‘One’ and scene one begins. A chubby, middle-aged male chauvinist (Steve Rodgers) is sitting at his computer, filling in the application form for a dating agency. He is married but he and his wife, despite living together and still sharing a bed, both live their own sad lives. In another part of the town is an attractive but lonely nurse (Andrea Gibbs) in her mid-thirties, she is the mother of two vile kids. She is also completing the dating club’s questionnaire on her computer. Like a tennis match, we hear their answers alternating from each side of the stage. Typical of the answers given by such love seekers, the truth and descriptions given are not too accurate.

Eventually a meeting takes place between this ‘IT genius’ and the ‘fun loving, unattached’ woman.

Through a dozen or so, gripping and sensitive scenes, their relationship rollercoasters along.

The writer is a very young, gay man who makes the rich quality of the topic even more amazing. The bizarre storyline shows in the deepest intimacy and with the most lucid understanding, the inner feelings of both the man and the troubled young woman. Many writers who much more older and seen decades of married life would have trouble capturing such candid depth of the characters.

The director, Lee Lewis and her assistant, Luke Rogers have managed to achieve a natural flow to the characters. With two superb actors, the personalities reach an incredible richness. Very quickly, you are groaning at the total, self-centred attitude of the lecherous man and seconds later feeling true sympathy for the woman, genuinely trying her best just to get a little back from life in return for her hard input.

Andrea Gibbs is famous around Perth for her warmth on morning radio and her hilarious stand-up comedy. She starts this performance in her comedy genre and then slowly, she skilfully turns her persona into that of a pathetic woman fighting life. I have known Andrea for more years than I dare tell, and have always admired her work, but the skills shown here was something that I have not seen before, she left the whole audience stunned. Steve has been acting for decades and perfectly captured the lazy greedy slob; the two actors were symbiotic, feeding each other in perfect tune.

You need to see this play. Pitilessly frank with fantastic writing, perfectly performed.