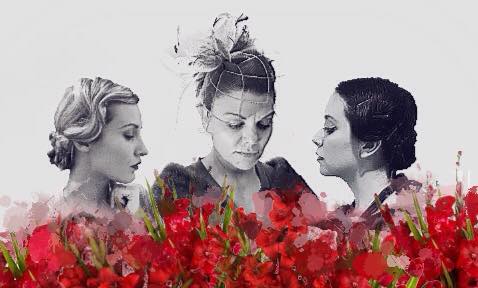 ‘The Maids’ (Les Bonnes) is a gripping play, written by the art critic, poet and legendary French dramatist, Jean Genet in 1947, when he was 37. Genet’s life story makes fascinating, jaw dropping reading.
The story became a film, being released in 1975; it starred Vivien Merchant, Glenda Jackson and Susannah York. In 1994, it even became a chamber opera. Andrew Upton’s famous 2013 Sydney stage production starred Cate Blanchett.
Genet has based his story on a brutal, real-life murder in France that was carried out by the infamous sisters Christine and Léa Papin.

This 75-minute Tempest production can be seen at the Studio Theatre, Subiaco Arts Centre, 180 Hamersley Road, Subiaco each evening at 7.30 until Saturday 14th November.

The scene is 1933 in Le Mans, in the boudoir of ‘Madame’s’ affluent home. The superb furnishings are a mix of classic French and Art Deco. To the left are a dressing table and a privacy-dressing screen. To the right, a pair of armchairs and a vintage ‘phone. At the rear of the stage is a large dresser with a vase of flowers.
The set has been very well lit by Mitch Whelan, who has achieved an old-fashioned glow to the room. He is also the sound operator.

The play starts with ‘Madame’ strutting around the bedroom, admiring herself in the mirror, playing with her expensive dresses and jewellery whilst belittling and abusing the poor maid.
Later the two sibling chambermaids are cleaning the room and discussing their obnoxious, affluent Madame (Maree Grayden). The older sister, the powerful, bullying and manipulating Solange (Kylie Maree) taunts the whining, nervous and insecure Claire (Aisling McGrogan). The sisters are so alone in the world, and allowed little time off; their only real pleasure in life is sadomasochistic role-playing, normally with one of them acting as Madame.
The telephone rings and Claire answers. It is ‘Monsieur’, Madame’s husband, who in an error of justice, was sent to prison. The maids are panic stricken on hearing the news. It is not long before Madame returns from a social event, and the maids have a special treat for her.

Gifted director Susie Conte has gathered an extremely talented cast for this difficult play. Each character has not only achieved a great deal of depth but an unusual amount of intensity. The personalities are complex and change in waves throughout the play.
I have seen this tale several times and still feel slightly cheated at the end of the play. This cast could not have been better, but although I don’t like to have the end to a production spelled out, another ten minutes by the playwright would, I feel, have given a more satisfactory ending.
Clever and admirable, the team should be proud.