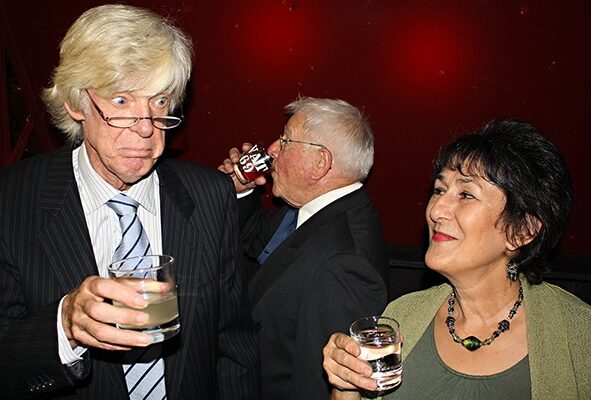 ‘The Herringbone Saga’ is a comedy, written and directed by WA playwright, Bob Charteris. Bob has written many comedies, all with a great deal of humour and with few clever twists added, this is no exception.

This two-hour play can be seen at the KADS Theatre in Barber Street, Town Square Centre, Kalamunda each Wednesday, Friday and Saturday until 28th May.

For any new people in the area and potential audience members, may I suggest that your beautiful posters and first-class website mention which theatre the show is at, and where the theatre is situated?

The scene is the year 2014, in the shabby lounge room of Herringbone Manor in Sussex. Due to encroaching poverty, the buildings have fallen into disrepair, with many of the artworks and treasures having been sold off. The set is the work of Richard Woolman, Bill Weighell, Paul Hodges and the designer Geoff Rumsey. The stage manager is Liam Rogers.

Act One – The pedantic and painfully overbearing, Lord Alfred Herringbone (Paul Anderson) is reading his ‘Times’ and sipping on a whisky. Meanwhile, his tolerant wife, Lady Penelope (Marsha Holt) tries to ignore Alfred’s demands for perfect syntax. Their aging butler, Wick (Geoff Rumsey) is now a luxury they can barely afford, but as the Wicks family have been attendants and loyal servants to the Herringbones for centuries, they keep him on.

On returning from holiday, their daughter Caroline (Rachel Vonk) suggests that they contact her friend Alyce (Natasha Smith) who works as a producer’s assistant on a TV show, dedicated to saving old manors. Will she be able to help? What will she unearth?

Act Two – We find ourselves back three centuries at the beginning of the Herringbone dynasty, where the first butler, Wicks (Les Marshall) takes care of handsome, debonair Amberley Herringbone (Paul Reed) who is being chased by a gypsy girl (Natasha Smith). When he rejects her, she puts a terrible curse on the House of Herringbone for generations to come. Perhaps antiques expert, Justine truelove (Charlotte Weber) may hold the answer to the misfortune.

The two stories are both very funny, the first Act was slick and worked well, however, the second Act suffered from the ‘Curse of the Herringbones’. With only days to go, two actors had to withdraw due to severe illness; unfortunately, this left the second story under rehearsed. A little bit of script editing would also help, but it was a good storyline and well thought out.

Paul Anderson gave a hilarious, supercilious performance, with Martha Holt brilliant as the frustrated, long suffering wife – great chemistry between the pair. Geoff Rumsey was perfect as the present day, gracious Wicks with all his subtle quirks.

Quite a complex lighting schedule designed by Don Allen and operated smoothly by Tiernan Stevens. Julie Hickling’s soundscape was operated by Jason Millman.

Having the author direct his own play can be a risk, but Bob Charteris has had plenty of experience both on and off the stage, and with this very good cast he did extremely well.