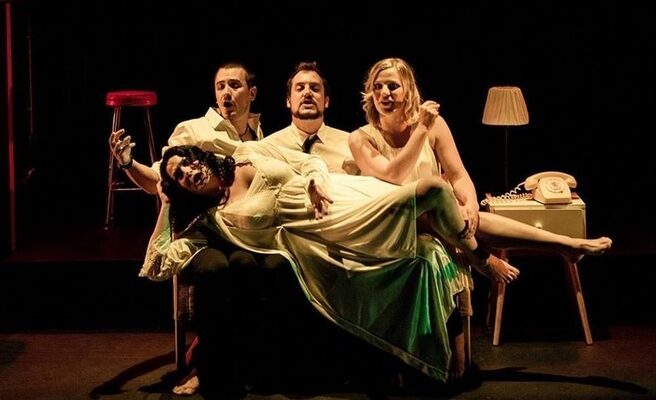 ‘Multiverse Theory in D’ is a dark, comic play for adults by Perth playwright, Jessica Messenger. Jessica started writing plays several years ago, mainly to be seen in schools as encouragement and guidance to young children; since then she her writing skills have developed into first class, intricate tales with ingenious storylines.

This 65-minute Ellandar Production, under the supervision of producer Belinda Huggins, has been developed with assistance of The Ground Floor Program. It can be seen in the main theatre at The Blue Room in the Perth Cultural Centre, James Street, Northbridge nightly at 7.00 until Saturday the 5th December.

To left of the stage is the gifted musical director, Suzanne Kasowits, providing – live – a varied soundscape and playing the double bass.

Designer, Tessa Darcey has designed a set (built by Josh Walker) around a collection of high daises. There is a sitting room with a bar area on the higher level; at ground level, towards the side of the stage, is a hospital bed. Lighting designer, Emma Caitlin Brown has effectively created the warmth of the home and the stark white light of the hospital ward. The stage manager was Daley King.

Naomi (Erin Jay Hutchinson) is about to have her thirtieth birthday, and whether or not it is due to the horror of reaching her third decade, she is confused and possibly on the verge of a nervous breakdown. Who better to help her than her best friend, Tegan (Esther Longhurst)? Tegan is a theoretical science nerd, who believes that every problem in the universe can be answered by the scientific logic of quantum mechanics; whether it is world pollution or a family problem.

Tegan and Naomi chat about recent events, such as why Naomi left her boring, Bible-thumping husband (Nick Maclaine) for a more stable, exciting life with a highflying solicitor, John (Josh Walker).

Did Naomi do the right thing by leaving her husband? What were the alternatives? What if she had been someone else in the same circumstances?

Jess has created an intelligent, interwoven script with fresh ideas and brilliant dialogue. The storyline has you wondering at first what is happening, then like a jigsaw the piece fall satisfactorily into place.

The play starts with scat singing – improvised jazz singing – a very difficult technique to conquer, but the cast were most competent. At several points in the play, Erin gave us a powerful and touching solo. Her singing and musical delivery were outstanding.

This poignant tale has some very moving moments, superbly acted by the two female leads. You can really feel their anguish.

Jess Messenger’s direction, mentored by Humphry Bower, creates fascination in the storyline whilst holding the attention. Most of the cast are renowned for their comedy plays, and so conquering this deep, fast moving drama was a new challenge. The characters were real, alive and instantly recognisable. Great work by a well-respected team.