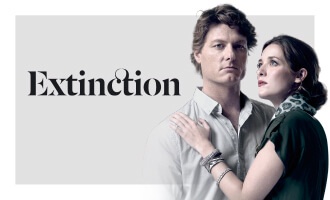 ‘Extinction’ is a highly entertaining play, by Melbourne-born Hannie Rayson. It is having its World Premiere at the Heath Ledger Theatre, within the State Theatre Centre of WA at 182 William Street, Northbridge.

The Black Swan State Theatre Company is presenting this wonderful, two and a half hour play nightly at 7.30 until the 4th October.

Bryan Woltjen’s innovative sets consist of a vet’s operating room, an office and a residential, high-rise flat – all minimalistic, with no trimmings. The view from the rear windows brought life to the rooms. In the second Act, there was a woodland scene, which blew everyone away bringing the designer an enthusiastic applause.

The complex sound effects (Ben Collins) ranged from the tropical storm, to squeals of the quoll and the chatter of the woodland creatures, very clever. As ever, Trent Suidgeest’s lighting design was employed to great effect in creating atmosphere.

Veterinary surgeon, Andy Dixon (Myles Pollard) has travelled the world treating exotic animals. On one of his trips, he met a young woman, Piper Ross (Hannah Day) who was wholeheartedly dedicated to the conservation of animals. Now, back in Australia, they open a country veterinary practice.

One night, as a storm rages, a man rushes into the practice carrying a wild animal wrapped in a blanket. It is an injured quoll. The concerned driver, Harry (Matt Dyktynski) has just hit the creature with his 4-wheel drive. As Piper starts treating the Tiger Quoll, she is inwardly quite thrilled, as quolls have not been seen in their area for at least a decade. Andy returns from delivering a calf, and after a clash with Piper on the best therapy for the quoll, continues the treatment.

The vet’s sister, Heather Dixon-Brown (Sarah McNeill) has a research PhD, and is Professor of Conservation at the university. She too is devoted to preservation, but is frustrated that all of the government funding seems to go to the wrong causes and her projects could close through lack of support.

What a wonderful script. In the wrong hands this could easily have become a tedious lecture, however, Hannie has given the story dozens of interesting and controversial story threads, some of which explode when you least expect.

The director, Stuart Halusz, was faced with a dialogue-based script and little action, but being an award-winning actor, he has the skills to ensure his magnificent cast have dominated their complex, fascinating characters.

For most scenes, Rayson had only two of the cast on stage at a time; this allowed the true temperaments, and various foibles, to become slowly obvious to the audience. This permitted us to see how strong or delicate the interrelationships actually were.

The play had controversy, humour, suspense, sadness and of course, the all-important SEX.

It is a long time since I have heard such an enthusiastic final applause from an audience. The ‘Quollity of enthusiasm was not restrained’, a superbly written, uplifting, wonderful night’s entertainment by a skilled cast.