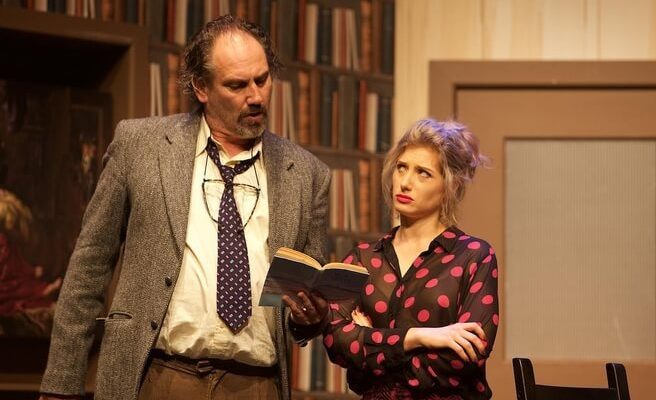 ‘Educating Rita’ is a classic that was written in 1981 by Willy Russell. Russell also wrote the wonderful and ever popular ‘Shirley Valentine’, along with the tense, family drama, ‘Blood Brothers’; all based in and around his home town of Liverpool.

After a very successful tour in 2007, HIT Productions and Christine Harris have brought this brand new production, under the directorship of AFI Award winning Denny Lawrence, back to Kwinana. It was presented for one show only, at 8.00 pm on Thursday 19th May in Theatre 1 of the Koorliny Arts Centre, 6 Sulphur Road, Kwinana.

The set comprised two walls of bookshelves, a desk, side table and several chairs. Then of course there is the 1610 painting of ‘Samson and Delilah’ by Rubens.

The music ‘Ferry across the Mersey’ faded as the lights came up to show us an unkempt lecturer, Frank (Colin Moody) dressed in beige corduroy trousers. As he peered over his spectacles, supported by a cord around his neck, and explains how mixed-up his life is, and how now – for extra drinking money – he works at the new Open University (set up in the UK to give everyone a chance to attain a degree whilst living at home and working fulltime).

Frank’s office door rattles, before almost being broken down by a young hairdresser, Rita (Francesca Bianchi), naïve but will ‘take no crap’. She is full of enthusiasm to learn and so wastes no time in telling Frank that he has to dry out and get his act together. Frank takes an instant dislike to Rita and her attitude and is not keen to have her as a student. Will his feelings change?

The two actors are instantly recognisable; Francesca Bianchi is partnering Sydney’s, Helpmann Award winning actor, Colin Moody – both of whom have numerous major TV roles and prestigious stage appearances to their name.

I have seen many versions of this play, including the film and this one won hands down. The grasp of the characters was amazing; they both had more depth than the Grand Canyon. It was a full house, and the audience were ‘educated’. Every pedantic comment that this Professor of English made was absorbed and appreciated.

Francesca is diminutive in stature, looking very much like Twiggy in the era of the play, but she was huge in delivery. She had a perfect Scouse accent, the look of innocence whilst still being streetwise. Rita’s many costumes were straight from Carnaby Street.

Colin took Frank from being a dry confused lecturer, to a thoroughly inebriated, repulsive being with no self-confidence. His eyes and expressions were masterful. It was wonderful to watch the cold antagonism of the couple, slowly change to affection and in Frank’s case repressed lust.