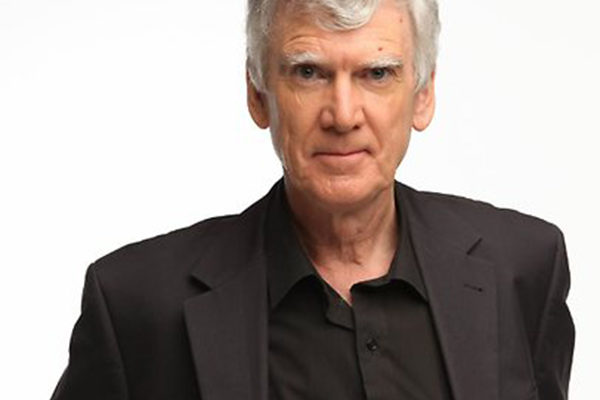 ‘After The Ball’ is a dramatic comedy from one of Australia’s most admired and award winning playwrights, David Williamson. David celebrated his 73rd birthday last week.

This wonderful observation of family life and attitudes in the 1960s was published in 1997 and first produced the same year. The play is thought to be semiautobiographical.

This fine production from the Darlington Theatre Players can be seen nightly at the Marloo Theatre, Marloo Road, Greenmount until 21st March. Curtain up at 8.00 pm.

The stage is divided into three areas. To the left is a hospital bed complete with drips etc. At the rear of the stage is a raised area representing the mother’s home, with black drapes for the walls. The simplicity of the scene is compensated for by the high quality of the props, ranging from an old record player to antique furniture (Carol Hall).

On the right is a turntable stage with a 1960s kitchen on one-half and on rotation a comfortable 1990s sitting room. Again, the extras make the scene, such as little touches as the calendar changing as the years go by. Another clever set from George Boyd.

The opening scene is an intensive care unit of the local hospital. An elderly woman takes a deep breath through her oxygen mask. This is Kate Macrae (Amanda Minutillo). Her loving and caring daughter, Judy Macrae (Kerri-Anne Mulley) and her son, who has travelled from France to see her, visit the mother. The son, Stephen Macrae (Paul Reed) is more interested in getting back home, than talking to his matriarchal mother. Even on her deathbed, Kate is not giving up on being the boss.

As they, sit chatting in the ward, Kate recalls her now departed, racially bigoted and politically one-eyed husband, Ron. The mother, despite having suffered at his hand for years, stills seems to show affection for the bully.

Later at the mother’s home, the siblings are going through old photos and letters in preparation for her passing. As they talk, there is a flashback to the stormy lifestyle in their 1963 childhood home, where the father Ron Macrae (Richard Milner) is trying to run rehearsals for a community play. A younger Kate Macrae (Irma McCullen) is trying to help a very nervous, incompetent actress, Maureen Donahue (Alyssa Burton – hilarious) struggle through her lines. Director, Ron is far too busy admiring the many ‘qualities’ of another actress, Claire (Rachel Bartlett).

A couple of years later, in 1965, as the family are eating their breakfast, the father is ranting as usual and the young son, Stephen Macrae (Ben Constantin) tells his kid sister, Judy Macrae (Elanor Cooper-Ritter) that he is going to leave home and his Uni course, travel abroad and become a film director.

Does the passing of the years mellow this family?

As the scenes are many (two dozen) and quite short, I suspect that this play was written with TV or cinema in mind, with simple intercutting between scenes. Despite clever set design and fast changes by the crew, the flow was inevitably broken up.

Director Hayley Derwort and her assistant Rachel Vonk are two of Marloo’s younger members, both of them directing for the first time. They were faced with a large number of very different characters in the script, but this did not faze them, the interaction between the actors, the pace and the chemistry all worked well. The acting was such that the lady behind me in the audience kept forgetting it was a play, and became quite irate at the attitude of the father – especially to immigration – and to the son’s feelings for his mother, with comments like ‘He can’t say that!’ and ‘That is terrible!’. A sure sign that the cast and directing are working as one. A very good first stab at direction, the slickness will come after a few shows.

This play is very different to David Williamson’s normal, easy-going, fun plays. It is a wonderful, punchy observation of family life, combined with the outdated viewpoints; it is amazing how much opinions have changed for the better in just a couple of decades. We also get a brief glimpse at the employment conditions of the 60s. The younger Kate Macrae (Irma McCullen) captured the wife’s torment perfectly and her spar with Stephen (Ben) is one of the play’s highlights.

Rachel was also responsible for the costumes, which demanded styles from several eras, from 1960s flares and Paisley, to the attire of the 2000s. Her clever outfits described the fashion and personality of the wearer instantly.

Certainly worth seeing. There are plenty of laughs, but with many occasions where you will cringe at the diabolical dialogue. Very well acted, another winning production from Marloo.