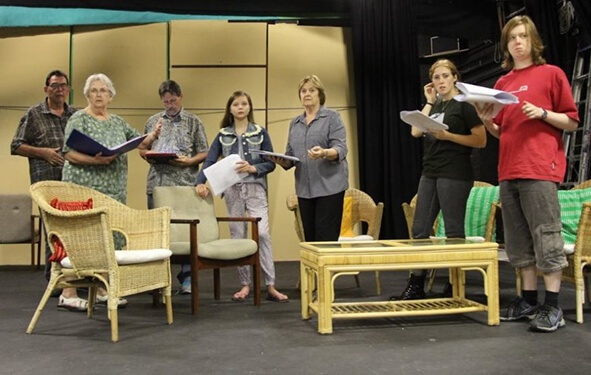 ‘You Can’t Have One’, a World Premiere of Peter Flanigan’s latest family comedy. Peter is one of half a dozen Western Australian playwrights who regularly produce top-notch comedies and farces. He has written around one play a year for the last 50 years – this is one of his best.

This two hour, hilarious show by the ever-reliable Stirling Players, can be seen at the Stirling Theatre, in Morris Place, Innaloo on Thursday, Friday and Saturday nights until 14th May, with curtain up at 8.00 pm. There are also matinees on Sunday 1st and 8th May at 2.00 pm.

The main set is of an untidy, family home sitting room. On the apron at the side of the stage, is a Marriage Counsellor’s consulting room (Jim Chantry). There is a surprise set in the final scene (artwork Margot and Luc Watkins).

The curtain opens to reveal a Marriage Counsellor (Jenni Glassford, continuing her everyday occupation?) chatting to a couple with marital problems. Barry (Tim Riessen) has been married happily for many years to Sally (Janet Weston – excellent), however, he has now retired and cannot understand why his domestic tasks should be increased, even though Sally is still in fulltime work.

We flash back 3 months and find Barry languishing in his armchair, even though the room is desperately in need of cleaning. As he is reading, a young girl, Alice (Gema Seenarain) wanders into the room. He has never seen her before. It becomes clear that she is the new girlfriend of his lazy, useless son, Cameron (Steve Anderson).

Barry and Sally’s elder daughter, Alisha (Natasha Van Odyck) is madly in love with an obsessive conservationist, James (Kieran McDonald), whilst the younger daughter, Kya (Neve Havercroft) is happy just to annoy everyone in order to get her own way.

Two other love interests are played by Melissa Skeffington and Carole Wilson – and there is little Chanel.

Few directors are capable of writing and directing their owns plays. Peter has had years of experience at both and although now proficient enough to tackle this play himself, he has recruited the help of an assistant director, Jann Rutherford.

The script was very well written, with the dialogue and attitudes of the young and old perfectly observed. I could hear the play dividing the audience, with the women commenting (during the play) ‘of course the house is dirty, men never do any housework’. Whilst the men could be heard sympathising with Barry, and commenting on the kids being glued to their mobiles.

The acting pace was superb, but although the scene changes were good, they could possibly be better planned. The fast moving stage team could carry props onto the stage when entering to clear the previous set, instead of making two journeys. On a floodlit stage, don’t worry about chair positions being correct to the centimetre. Even slowish scene changes can make it hard for the cast of a comedy to bring the pace back up.

This show was very well acted, almost the whole cast had to have ‘attitudes’, from anger to that of the 13-year-old going-on-23. Very good comedic delivery and body language. Michelle Tennant’s costumes clearly stated the personalities.

This play was a huge amount of fun, very near the bone for many families, but one that I can recommend for a good night of entertainment. The script is a Peter Flanigan triumph.