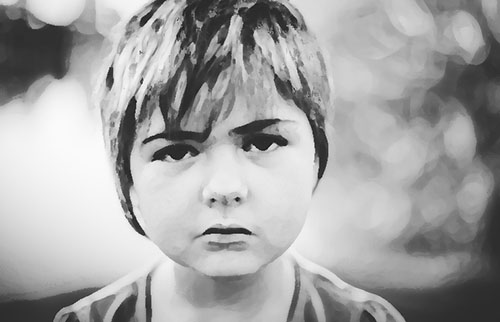 ‘What Do They Call Me?’ was originally performed by the playwright, Eva Johnson as a one-woman play. Eva belongs to the Malak Malak people and was born at Daly River in the Northern Territory, but as one of the stolen generation she was taken at the age of two to Croker island and then at 10 yrs. to an orphanage in Adelaide. After training as a nurse she went on to attain a degree at Adelaide University. Being multitalented, Eva also won the 1985 Aboriginal Painter of the Year award.

Now at the Blue Room, this classic Indigenous triple monologue from TEEM Productions, is making its West Australian debut.

The 45-minute performances are at 7.00 pm, in the Main Theatre, Blue Room complex, James Street, Northbridge and shows run until Saturday 27th September.

The seating is ‘in the round’. Centre stage is a school bench, an office desk and chair.

Once again, this high-spirited young mother, Connie Brumby (Amy Nyidi Smith) finds herself being booked into the lockup. For little reason, the police broke into her home without a warrant – after all it is a ‘coon’s house’ – looking for her son. Without pulling any punches, Connie tells us a couple of other disturbing and heart-breaking intrusions into her home that have taken place in the past.

Successful businesswoman, ‘Eurasian’ Regina (Alyssa Rose Thompson) is sitting at her desk when she receives a call from her mother. Her Mum has at last gathered the courage to give Regina some information that she should have declared decades earlier. It is a call that causes a great deal of confusion, but gives many solutions to all those unanswered questions.

Young Alison (Ebony McGuire), a lesbian activist and fighter for many causes, has been given a classic Aboriginal book for her birthday by a friend. It starts to dawn on her that her partner still sees her as a ‘coconut’ and not simply as classless, race-less, simple human being. Naturally, Alison tries to sort things out in her own mind.

Independent producer and director, Eva Grace Mullaley, is an Artistic Associate at the Yirra Yaakin Theatre Company and a lecturer and mentor at WAAPA. Not surprisingly, she has taken these three monologues and with an extremely talented WAAPA cast, giving very clear but different approaches, their stories unwind.

Amy gave a very powerful and angry performance. Alyssa was most convincing as the normally assured and sheltered woman who could see her security collapsing beneath her. Ebony captured the complexity of a girl with so many social ‘differences’, trying to come to an understanding with herself.

The lighting design was by Tegan Evans. She had simple spot lit areas, picking out the character under examination, but there were foot prints projected on the floor and walls suggesting the girls’ journeys from their source. The sound design was by Wayne Freer and the striking audio visual, showing a family member being hunted down was by Shakara Walley.

Three very different tales, written some years ago, but all with their own strong punchlines still most relevant today. Very well acted and directed.