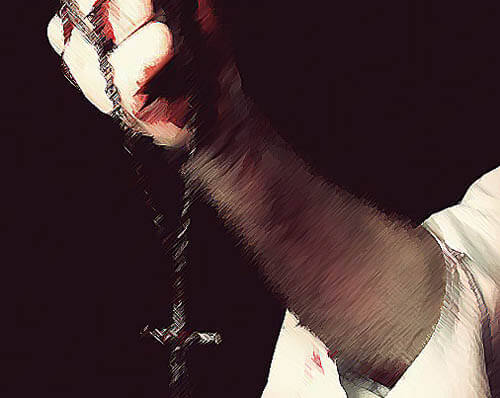 ‘Werewolf Priest! The Lamentable Ballad of Father Hank Grimby’ was crafted by Levon J Polinelli, being his first major theatrical piece as a writer/director/producer. Aged nineteen, Levon directed a trailer for a bogus Bollywood Kung Fu, which became a finalist in Margaret and David’s ‘At the Movies’ 25th Anniversary trailer competition. Most of his work is in comedy productions.

WAAPA trained co-producer, Kim Mary, also has an eye for fun being known as a leading light in the Perth Burlesque scene. She runs Show Pony Media, an events management company.

This hilarious 90-minute show runs each night at 7.00 pm until the 7th June in The Blue Room Main Theatre, 53 James Street, Northbridge.

Designer Reece J Scott’s set is a dark, bleak forest in Huntersville. Corrugated zinc sheets hang from the ceiling symbolising a house. A great deal of work has gone into producing an authentic 1880s atmosphere. The myriad of props and furnishings were quite amazing.

There is a full moon, and a young priest, Father Hank Grimby (Sven Ironside) is walking through the woods, when a bloodcurdling sound is heard. In terror he flees, but is caught and mauled by the creature. The next day he awakes in the home of Mayor Gainsborough (Adrian J. Lowe). He is being examined by anatomy researcher and family quack, Dr Talbot (Stephen Lee), and affectionately tended by the Mayor’s beautiful young daughter, Brooke (Siobhan Dow-Hall).

The Mayor has searched the world for a suitable husband for Brooke, and discovered George Waggner (Magnus Danger Magnus), a legend in his own mind. This rumbustious and loud swashbuckler loves to tell stories of his journeys around the planet and of his many passionate affairs on the way. However, Brooke is in love with another, will she really have to marry this blagger?

When a local farmer, his wife and daughter (Rhianna Hall, Tiffany swan) are all attacked by the illusive werewolf, bold George takes on the help of the village yokel, Tomas (Daniel Buckle) and seeks revenge.

Last night, seconds before curtain up, the fire alarm went off and the building had to be evacuated. The cool damp air did not chill us too much; as the group watched the fire tender disappear up James Street in the wrong direction.

Director Levon J Polinelli must have a Marty Feldman style mind. In this play, there is every genre that you can think of, a true melange of styles. In theory, the show should not work, a hotchpotch of everything, and yet at the final curtain I found myself joining the audience to give a loud, well-earned standing ovation. Why did it work? Because each genre had been tackled professionally and skilfully; and they all ‘just worked’.

The director was not too subtle about copying famous cinema styles; it became a ‘Spot the movie competition’. The opening was like something from the famous Hammer Horrors of the 1960s, creepy and filled with atmosphere. The priest sang a dirge-like incantation to low register, organ music, mingled with rattling chain noises, the overall effect was chilling. The mood swung to a love scene, sensitively handled and with a memorable song.

Musical director and composer, Ash Gibson Greig, blended into the score any special sound effects. There was a breath-taking scene, complete with dancing and vigour, reminiscent of Fagan in ‘Oliver’ singing ‘pick a little pocket or two’. Without thinking, you will find your foot tapping and joining in with the chorus.

The producer and director were shameless in their delivery. A gory scene became one of the biggest laughs of the night. The final horror scene had full orchestral backing with Michéal McCarthy conducting the Eneksis Choir. The orchestration and power were stunning.

The singing by the cast was amazing; Magnus especially, just carries you along with his warmth and enthusiasm, whilst Sven and Siobhan were perfectly balanced. Siobhan is a WAAPA trained actor, who has had major parts in film and TV, but I still think that she is one of WA’s most underestimated actors. Her singing was heavenly, her dramatic acting superb and her comedic delivery outstanding – a treasure to keep an eye on.

Stephen Lee is renowned for his Shakespearean performances; here he delivers his lines in a dramatic style, but with his tongue firmly in his cheek, hilarious. If you think this review is filled with clichés, then wait until you see this play. It has every hackneyed phrase and cliché throughout, but this perfectly controlled ham approach brings a smile to every face as it makes fun of itself.

The director employed all three-stage entrances, and with the cast being stage managed by Keaton Howe, the intricate set changes were quick and faultless. Elliot Chambers’ lighting changes were complex, but extremely effective in creating the exact mood.

Could this wonderful show be the Audience Choice winner this year? Mortgage the cat if you have to, but get some money to buy a ticket to this zany show. It sparkles.