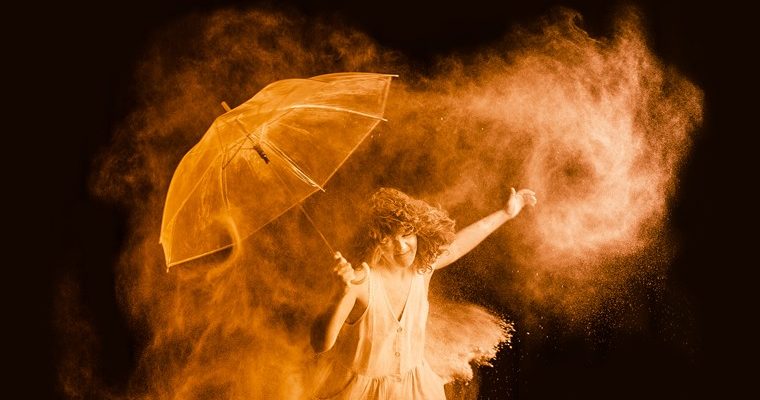 ‘Under This Sun’ is the Premiere of the first work to be presented by The Emergence Company; a sensational, new WA contemporary theatre company that has teamed up with The Blue Room Theatre, to present this production about our primeval land. The team-written play features three, intertwined stories. It also contains the original poetry and prose of Henry Lawson and Banjo Paterson.

This 60-minute play runs nightly at 8.30 pm until 6th June in the Blue Room Studio Theatre, 53 James Street, in Northbridge.

I don’t normally comment on the marketing of productions, but Jamie Breen’s promotional photograph is outstanding.

At first glances the set is simple, merely a rostrum with a couple of buckets of red desert dust sprinkled on top. Then the stars come out and the designer, Tessa Darcey along with lighting designer Emily Crane (operator Daley King), gives us an innovative treat.

The soundscape is beautifully subtle, with the hint of the desert wind, clever work by sound designer Mike Podmore.

We find ourselves in a pub, just past the black stump. In the bar, celebrating his 18th birthday is Cooper (Peter Lane Townsend), a bush born and bred lad with very little between his ears. In fact, for his birthday treat, his father is going to abandon him out bush to harden him up. Cooper is being served by Grace (Maja Liwszyc) who spends her time between customers reading legendary Aussie poetry. Grace is worried because five days earlier her brother went out bush and has not returned.

At the other end of the bar stands city slicker, Jeremy (Tristan McInnes), an adventurous lover of nature, with no real idea how dangerous and oppressive the outback can be. He has come to central Australia to follow in the footsteps of the American poet, Jean-Louis ‘Jack’ Lebris de Kerouac – one of Bob Dylan’s idols and his major source of inspiration.

Director Warwick Doddrell has gathered a wonderful team that has created a tangible desert atmosphere. The audience could really feel the harsh desert sun, the arid atmosphere was palpable. The direction kept the pace moving along rapidly, as the story took us from one location and story thread to another. Each actor created a rich persona that the audience wanted to more about and really cared for. There were plenty of laughs and brief times of terror.

Symbolism was used most effectively on occasions such as in the bar, tending the desert creatures and climbing the local monolith.

A clever production that really captured the atmosphere of central Australia.