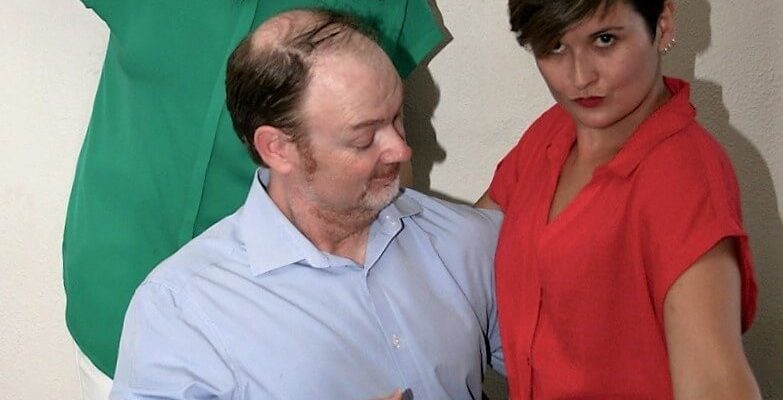 ‘The Woman Who Cooked Her Husband’ was written by Birmingham-born Debbie Issit, who recently turned 50. Her film script ‘Nativity’ became the most successful independent film of 2009.

This 90 minute, strange but very funny, black comedy is being presented by the Harbour Theatre Company in the Camelot Theatre Complex, 16 Lochee Street, Mosman Park.

The curtains rise on Wednesday, Friday and Saturday nights at the early start of 7.30 pm until 14th May. There are Sunday matinees on 8th, 14th and 15th at 2.00 pm.

This show has no interval.

The opening scene (designed by Peter Kirkwood, Nicola Bond) is the middle class home of Kenneth and Hilary in the London suburbs. The stage apron acts as the working class home in East London, of Cockney Laura. The set is almost cellar like, with threatening black walls and blood smeared over them. Next to the proscenium arch were three metre paintings of a blood covered knife and fork (Melissa Bassett).

The scene is the dining room, with fine wooden tables and chairs (Grace Hitchin, Brian Mahoney). Most of the props, food and furnishings are left to the audience’s imagination – and surprisingly, it works very well.

The simple set décor was a wise decision, as it allowed the audience to follow the richly written script without distraction. The reliable team of Rob Tagliaferri on lights, and Vanessa Gudgeon on sound, worked well, showing subtlety succeeds.

Today is Kenneth and Laura’s third wedding anniversary, and to Laura’s horror, Kenneth has accepted an invitation from his ex-wife Hilary to go around for a meal. The atmosphere is very tense and uncomfortable.

We then flashback about four years.

At a friend’s birthday party middle-aged, philandering Kenneth (Jarrod Buttery) finds himself in the arms of Laura (Cordelia Clarke), a leggy beauty half his age. His poor wife Hilary (Meredith Hunter) has numerous domestic talents, but for Ken her body after 20 years of marriage has collapsed, and in the sack she is stale and boring.

How will this trio’s relationship develop?

Under the direction of the multi-award winning team, Peter Kirkwood and Nicola Bond – who have presented a couple of dozen memorable plays for Harbour over the years – these three most experienced actors were at their best. Jarrod as the unashamed letch, Cordelia as the gullible young woman and Meredith – outstanding – as the poor abused wife. They all delivered their lines with conviction and emotion. 90 minutes non-stop, with all three on stage continuously, is a big ask, but they had perfect pace, beautiful intonation and their expressions spoke volumes. Top notch acting.

You know that the actors’ acerbic comments are successfully getting through to the audience, when, like last night, one lady shouted out ‘Kill him’, and I think if the ending wasn’t to her liking she would have obliged.

Great fun, try and catch it.