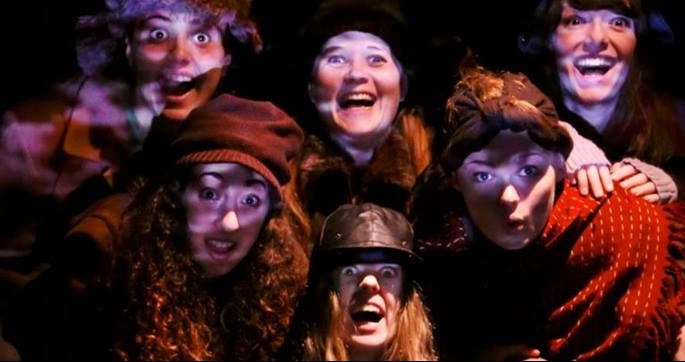 ‘The Shimmerin’ is the end of year presentation by the Curtin Performance Studies Honours Cohort in conjunction with the Hayman Theatre Company. A 60-minute fantasy tale devised by the students, it demonstrates many of the skills required by actors.

This fascinating show can be seen nightly at 7.00 in the Dome Sports Centre (the geodesic building – shaped like a golf ball), is near the hockey field on Dumas Road, within the Curtin University grounds, Bentley until Sunday 28th September.

The stage is a large concrete floor surrounded on two sides by a curved red brick wall. There is a large arch, filled with a black wooden frame, in the centre of the wall.

The audience seating curves around the other two sides of the stage, at floor level.

The lights dim and the archway is filled with a black and white film image (video design by Catherine Bonny) of moonlit rocks with the sea crashing over them. The moonlight is shimmering on the surging water. From nearby woods come seven sprites, attired in powder blue costumes. They play games amongst themselves and sing an incomprehensible old English song, in an almost ecclesiastical chant.

As the imps play, they reach for two sticks stored in the quiver on their backs, and beat them together. As if like magic, these sticks seem to control the weather. The wind builds up and the elements change. Soon they are blown down to the shore and into the waves. They swim and play, but they do not notice that one of their number has been caught in a rip and is knocked unconscious. She is washed ashore. The others look everywhere for her, before regretfully giving up and returning to their dells.

A pub door opens and a set of drunken yokels fall out. They stagger into the street, fighting against the gale force wind. They find the ‘dead’ sprite and decide to bury her. However, on returning with spades and flowers, find that she has disappeared. They eventually capture her and appear to be caring for her, but is this true generosity or do they have more dark and selfish motives?

The team of actors (Violette Ayad, Catherine Bonny, Tessa Carmody, Ella Churchward, Melissa Dusting, Emily Kingsley and Laura Scott) are seven graduates who come from very different backgrounds. Some were Curtin Theatre undergraduates, some studied at other universities in a number of diverse subjects including art, animation and creative writing.

The cast have created a play that incorporates many genres. There is humour that will have you laughing aloud, contemporary dance and movement that any French Marcel Marceau fan would admire. Then there is the canticle and poetry, delivered as though spoken by Bill and Ben the flowerpot men – with no real meaning but so much expression and enthusiasm that you have no doubt as to what is going on.

The director, Ellis Pearson is renowned for his innovative soundscapes that include weird and wonderful musical instruments. The play opens with a superb Bb trumpet solo (Michael Biagioni) accompanied by a wind noise machine and cymbals played with swoosh mallets. An ancient Romanian Stroh violin is used later by Ellis to raise the sprite from the dead. Whilst searching for their friend, the imps are each given snare drums of increasing size. From a tiny 20 cms to a massive 80 cms bohdran, giving the performers almost an octave of notes to play with. I apologise for not knowing the two female musicians’ names.

The basic lighting was simple, but was supplemented by the fast-moving Techtons (Ashlee Brown, Anna Linsted, Aaron Smith) running around with tiny spots on poles, floodlights on wheels and creating weather effects. The complicated scenes were smoothly stage managed by Amanda King.

The cast were magnificent, with mime, dancing, singing, acrobatics and a very unusual style of vocal delivery. These Master’s Plays are meant to test their stagecraft to the full and this group were certainly tested to the limit.

This is a play for patrons that appreciate quality in performance and for any youngster considering acting as a career. The show is only on for another couple of nights. It has a dark end so not for the very young, otherwise a very admirable performance by all concerned. Exciting and memorable.