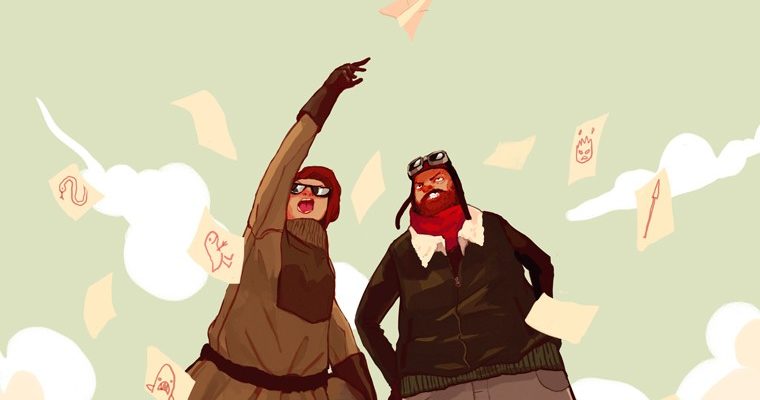 ‘The Epic’ was written by part-time performance poets and full-time story enthusiasts, Finn O’Branagáin and Scott Sandwich. ‘The Epic’ was developed from an idea whilst at The Arteles Creative Centre in Finland in 2012, and then this script was further developed at a NIDA playwriting diploma course a year later.

Finn was a finalist in the Youth of the Year award for Northern territory, and Scott has been a poetry finalist four times – twice in the World Cup.

The 70-minute performance can be seen in the main Blue Room Theatre, 53 James Street, Northbridge at 7.00 pm every night, until Saturday 13th June.

The Auslan interpreter, Christy Filipich, is available on one night only, Thursday 11th June – and the very best of luck Christy with the Finnish story!!

Desmond Tan designed the set; it comprises a dozen, 60 cms high, black cardboard, snow-capped mountains standing on the floor. The rear wall depicts a massive mountain range. The symbolised flight of snow geese were flying past; these ‘birds’, the scenic Alpine houses and trees, were made by Crystal Lim, Tonia van der Helm and Michael Cassells. Further visual effects were projected onto the wall. Lighting designer was Joe Lui and Tom Hogan composed the creepy music.

On entering the auditorium, the audience receive a warm welcome from the two beaming performers. Finn is dressed in a classic little black dress, Scott in a grey suit and shirt, with a checked bow tie.

Within seconds, you become aware that Finn is the sensitive, precise storyteller and that Scott, with a cheeky grin, will not let accuracy come in the way of a good yarn.

Scott starts the tales, gleaned from around the world, which cover many millennia. He began with ‘Homer’s Iliad’, I quietly cringed having studied it in Latin, at school for 3 years, but now, smiles came to all the faces. Scott carefully picked out the relevant highlights of the stories, and added his own irreverent slant to the whole tale.

The zany couple explain how, by Chinese whispers, the stories have changed over the centuries. Finn gave us a beautiful rendition of a story from Mesopotamia, rapidly followed by a gory vampire saga from the cinema.

Scott, with perfect diction, related the Finnish folk myth, Kalevala. This was 1,000 pages of folklore crammed into about 6 minutes of rapid-fire monologue. The complexity of the script, the numerous story threads, the pace make this one of the most memorable orations that I have ever seen, it must have taken weeks to learn.  Both performers used their bodies to enhance the vivid descriptions of the heroic stories.

WA’s admired writer / director Jeffrey Jay Fowler, along with writer and WA’s Queen of the stand-up comics, Andrea Gibbs, mentored the stars and writers of this show.

Towards the end of the show, Finn confided that Scott Sandwich might not be her partner’s real name, thank goodness, as Google’s Urban Dictionary describes Scott Sandwich as a link between peanut butter and a posterior – too much information? You should read the dictionary! We never did find his real name.

This storytelling is unique; you have never seen the like before. The raconteurs have picked fascinating tales, and with a little poetic licence, produced a really fun night, with smiles guaranteed.