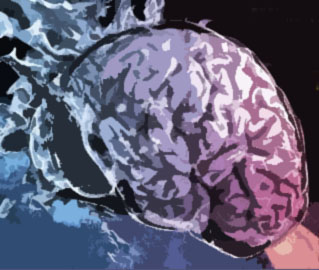 ‘The Brain from Planet X’ is a spoof-musical, based on a droll send-up of numerous well-known series of the 1960s written by David Wechter and Bruce Kimmel. This comedy was written in 2006 after watching a spate of abysmal Sci-Fi films of the 1950s, the play’s name being a blend of some of their names.

I saw this final rehearsal on the night of a full moon, but it was still a family show (for over 10 year olds). It is about Aliens but there is no blood or gore, no really frightening scenes, just lots of fun from the cast of thousands.

The music and lyrics were added later by Grammy-nominated, Bruce Kimmel (who acted under the name of Guy Haines in ‘The Partridge Family’ and ‘Happy Days’). Bruce’s first musical treasure in 1976, was a lewd farce called ‘The First Nudie Musical’ – perhaps Phoenix’s next offering?

This humorous Australian Premiere is a joint production by Phoenix Theatre Inc and Dark Psychic Productions; it is being presented at the Phoenix Theatre, Memorial Hall at 435 Carrington Street, on the corner of Rockingham Road, Hamilton Hill.

This outrageous two and a half-hour, vibrant production has ‘curtain- up’ at 8.00 pm on three consecutive weekends – Thursday, Friday and Saturday nights – until 27th September. There is one matinee on Sunday 21st at 2.00 pm.

It is summer 1958 near San Fernando, and the alluring radio reporter (Shaun Griffin) warns that strange objects have been seen in the sky. In a nearby cottage live the perfect American couple, inventor and visionary, Fred Bunson (Gary Devries) and his doting wife, Joyce (Sylvia Mellor). Their well-mannered daughter, Donna (Mikaela Innes) who desperately wants to be a bad girl, is asking if she can go to the local dance. ‘Only if you take you kid brother’, Tommy (Jayden Timms) which she is only too pleased to do.

At the dance, Donna meets the love of her life, Hippie Rod (Krispin Maesalu) and goes for a ride in his car. We see a spaceship landing and before we know it, three Aliens have landed, sending a farmer (Chris Doney) and his wife (Sharon Theil-Harkin) into turmoil.

A creature in a long flowing cloak and with a massive external cerebellum arrives; this is The Brain (Cody Fullbrook). With him is his highly strung, grovelling helper, Zubrick (Glenn Wallis) and the beautiful, appropriately named, Yoni – look up this Sanskrit word – (Kate Lloyd). They come from a planet where any kind of emotion is totally unacceptable, but the ardent Yoni makes up for the whole population’s lost passions. This is shown in the beautiful ‘I Need an Earthman’, delivered in the style of Eartha Kitt.

The army is called in, and is led by a lowly 1-Star general, desperate for promotion, he is General Mills (Mario Piccoli) with his strong, silent-type assistant, Private Partz (Jordan Norrish). They recruit Joyce Bunson’s elderly father, the scholarly Professor Leder (Pat McMahon) and a police officer (James Buckland) to help them tackle this Alien threat. When a local girl (Aimee Nicholls) sees Private Partz, she dumps her boyfriend (Keith Ong) for this uniformed hero.

When the Aliens try to ‘tap’ the Earthlings’ brains, they send for their ‘tap’ team – of dancers (Nikita Harwood, Darby Kelly, MMoloki Hartill, Erica Luck, Kylie Griffin and Devetta Ridgwell).

Will the Aliens win? Can anyone save the earthlings?

The outstanding chorus consists of Lisa Malatesta, Alex Rivas, Sheryl Gale, Angela Donlan, Brenda Gabersek-Goud, Sara Urban and her wonderful daughters, Leah and Ruby (who at 7 years old looked as though straight from the film ‘Annie’) did not miss a beat in the complex choreography. The dancing routines devised by Jayde Clark and her assistant, Kate Lloyd are bright and fill the show with magic. The dances were carried out in perfect sync and filled with energy.

It is obvious that director Ryan McNally and his assistant, Rebecca Coutts-Smith, have put a tremendous amount of thought into the movement and the delivery of this clever script. The dialogue has so many subtle references to the ham acting, expressions and sentence structure of ‘The Addams Family’, ‘Star Trek’ and ‘Happy Days’. Blended with the wonderful orchestrations of the 22 songs and tunes, many of which were toe-tappingly good, the show came alive.

The genres of music ranged from marches, soft shoe and high kicking, to passionate seductive melodies. The musical director, Krispin Maesalu, managed to unite the very large cast. They were pumped up, bringing life and smiles to their powerful delivery. The delightful chorus line did not have a single weak link; they gave all the numbers 100% vocally and physically, creating a memorable ‘opening’ and ‘finale’.

The main characters, Mr and Mrs Bunson, Donna, The Brain and his two assistants were all wonderful singers. They could all belt out a tune without faltering. Gary Devries is a new discovery and yet the audience warmed to him immediately. Glenn and Kate gave a high kicking routine and Cody was mesmerising as the Brain who almost hypnotised the audience with his delivery. Great loopy fun.

I know I often joke about the programme, but Shaun Griffin has produced a superb, full colour A5 programme. The lighting and sound from designer Alex Coutts-Smith has taken the show to a new and professional level. He had full movement, multi-pattern LED spots, which along with the standard LED floods gave an exciting movement and colour range to the songs and dance routines.

The five-piece live band was led by Josh Haines on keyboard. Talitha Dunn on numerous woodwind and brass instruments, along with Greg Critchley on acoustic bass and Catherine Motteram on piano helped complete the group.

Joe Snelgrove was supposed to be on drums, but someone said ‘Break a leg’ and he did, the night before the show. Mark Sutcliffe stepped in, and without any rehearsals did an amazing job. The music was sparkling and gave that special depth that a playwright’s CD of music would lack.

The costumes (Sheryl Gale, Jodie Innes and Ryan McNally) were stunning, and there were dozens, all well designed with plenty of clever and stylish finishing touches. The Aliens outfits were space age, comprising black leotards with Lego-like patterns sewn onto them. Even the Bunson family had the typical homely, daggy outfits of the late 50s. Clever design and a lot of work.

The set changing, and there were many scenes, were rapid and well planned and carried out by Jeni Stevens and her team of Alison Kovaks, Becca Jackson and Hannah Gould.

Don’t expect a triumph of a storyline, but the fun script with its subtle references to the old TV series is hilarious. If you enjoyed ‘Reefer Madness’ and want another good light-hearted, chewing gum for the mind entertainment at the end of a hard day’s work, then you will really enjoy this cleverly presented, tongue-in-cheek, madcap fun.

Go along and experience the thrill of ‘Feel-O-Rama’ as introduced by Gabi Guidone and Andy Griffin.

This is a catchy energy filled romp with plenty of laughs. As near to a full-scale professional musical as a community theatre production could expect to achieve. Excellent.