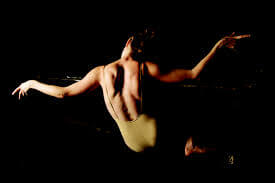 ‘Standing Bird 2’ is the exciting follow-up to last year’s highly successful show, ‘Standing Bird 1’ that was presented in the PICA theatre space; it went on to be one of the Festival’s most popular shows. The dazzling dance routines of both shows were conceived by Sally Richardson for amazing solo dancer and co-creator, Jacqui Claus.

Jacqui was declared the ‘Most Outstanding Female Dancer 2012’ by the prestigious Dance Australia Critics Choice.

This 60-minute, gruelling and daring dance routine is being presented in The Blue Room Theatre, James Street, Northbridge each evening at 7.00 pm until Saturday 29th November.

As the crowd gathers in the Blue Room bar to see the show, a leggy blonde (Jacqui Claus) in a little black dress giggles and tries to engage with the patrons. She seeks compliments for her body and eye-catching outfit, before buying a bottle of champagne. She swigs liberally, and soon she is well pickled and dancing wildly, with a great deal of style, to the pounding music. Rapidly, the next stage of drunkenness hits her and she has to retire delicately to the toilet (the main theatre).

The audience filter into the next door auditorium and take their seats. The girl is now much worse for wear and is leaning over a bathroom sink. The discordant music reflects the blood thrashing in her head along with the hiss of her laboured breathing (sound design Kingsley Reeve). Riddled with guilt and embarrassment, she staggers home to bed and has a restless night’s sleep. In her dreams – which are projected onto the reflective walls (visuals, Ashley de Prazer) – as she re-assesses her lifestyle, we can see the girl wandering on the beach.

As the breeze builds up, voices can be heard being carried on the wind (musician Kyle J Morrison on didge, and Joe Lui conventional instruments). On her bed the girl contorts, and then like a bird coming out of its shell, she twitches and stretches until she blossoms into a beautiful bird, preening itself and strutting around. Her bare back shows spectacularly how every bone and sinew develops and comes to life. The wreck of a woman has metamorphosed into an elegant, proud, long-legged, wading bird.

The set’s reflective walls were a clever idea (designers Fiona Bruce and Lauren Ross) that allowed the room to change from a dirty, drab toilet to a large open space. Her writhing on the bed consisted of tortuous choreographic movements (movement director, Danielle Micich), which were carried out with smooth graceful movements that belied the immense skill and energy being employed.

Once again, Joe Lui has filled the stage with mood lighting that goes one step further, helping the audience to grasp the inner feelings of this ‘bird’s’ transformation. There is semi-nudity, but is certainly not gratuitous, as this wonderful dancer shows us the chick developing in the shell and breaking out, with all the tiny muscle movements involved.

I hate to link such graceful and perfect body movements to a cheap TV joke, but my memory drifted back to the 1964 UK ‘Opportunity Knocks’ programme, in which a muscle man did muscle movements in time to ‘Wheels Cha Cha’.

The director, Sally Richardson, and her assistant Katya Shevtsov, with dramaturg help from Humphrey Bower have given us an amazing performance.

This is the kind of contemporary dancing incorporating crippling athletic skills, that any professional dancing student would dream of achieving. Magnificent. Clever story theme, perfectly executed.