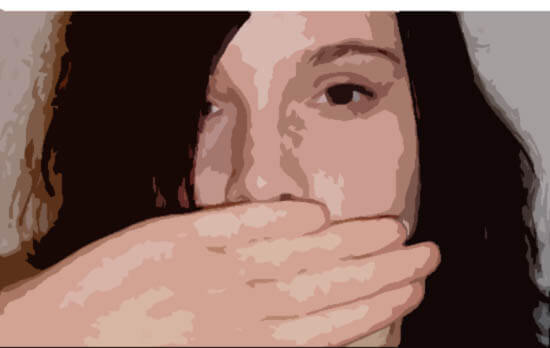 ‘So Much to Tell You’ is a 1987 novel for young adults, based on the true story of Kay Nesbitt whose face was damaged by chemicals. Victorian author, John Marsden, the retired principal of an ‘alternative’ school, wrote the book. The novel won several prizes, including ‘Children’s Book of the Year’ and has been translated into several languages. John adapted his true-to-life book into a play in 1992.

Now showing at the Garrick Theatre, 16 Meadow Street, Guildford, the 130-minute performances begin at 8.00 pm on Thursday, Friday and Saturday nights, until the 17th May.

The set is a typical girls’ dormitory in an upmarket boarding school. There is a mix of bunk beds and standard beds for the eight occupants. The set was built by a dozen people under the supervision of George Boyd, and the accessories that help bring it to life have been added by Lynda Stubbs.

Scenery flats on each side of the room are hinged to produce other set venues.

The Warrington school prefect, Jodi (Kiah van Vlijmen) addresses the assembly (the audience) and asks them to turn off their phones or they will be confiscated by the battle-axe Headmistress, Mrs Graham (Kelly van Geest).

The lights rise to show the Bedlam of the dormitory. From the top bunk, Ann (Shannon Berry), a nasty bit of stuff with a huge attitude talks to Sophie below. Sophie (Darcie Azzam), despite being from a wealthy family is a jealous, immoral bully. Gradually the conversation gets louder, when suddenly the room door flies open and furious Miss Curzon (Sereena Coleman) enters. She picks out who she thinks are the main culprits, the unfortunate Emma (Bre Edelman) and Cathy (Abagail Morritt), two of the dormitory’s innocents, who seem to be the scapegoats for the others.

Miss Curzon announces that a new 14-year-old girl will be joining their room; she is Marina (Elizabeth Offer), an introverted girl who has recently suffered injury, and so the teacher asks that they show sympathy.

When Marina arrives, it becomes apparent that she has not spoken once since the trauma, giving an abundance of fuel to the nastier elements of the dormitory, Ann, Sophie and Tracey (Brittany Isaia). Three of the more pleasant girls, Kate (Katie Toner), Lisa (Emily Theseira) and Rikki (Nahdarin Yahya) try to communicate with Marina, but to no avail.

As the semester progresses, no one seems to be able to break through Marina’s barrier, not even the most caring teacher of all, Mrs Lindell (Mary Murphy).

In her loneliness, Marina casts her mind back to happier days, her school ski trips with Fleur (Georgia Kinnane) and Sally (Nicola Kinnane) who broke her arm. Then there was accident prone Karen (Gen Verity) – who was lucky to survive the trip – and quiet Renee (Clare Small) a group that gathered daily in the piste café.

Marina would recall the security with her mother (Kate Offer) and father (Rhett Clarke), but those days have gone forever. Or have they? Can Marina become part of the school group and regain her parental love?

Scottish drama teacher Gail Lusted had a massive task on her hands. The cast was mainly 15 years olds, and so getting them to turn up at rehearsals, to retain the enthusiasm and drive was bound to be difficult. Then there was the brash schoolgirl behaviour, blended carefully with the tragedy of the new girl. The director won without a doubt, and the whole cast did her proud. The chemistry between the girls – many of whom were quite new to the stage – was genuine. There were no wooden or strained performances. The subtle humour was there, the attitudes and personalities shone through.

The teching by Clayton Reichert was very good, with excellent lighting effects for the dream sequence and the father’s abode. With almost three dozen scenes, yes three dozen, the whole flow of the story and the performance pace could easily have ground to a halt. The changes were rapid, efficient and with appropriate pop music backing, they were as unobtrusive as possible – well done Evan Stickells and team.

A difficult play to stage but an excellent effort. Most entertaining.