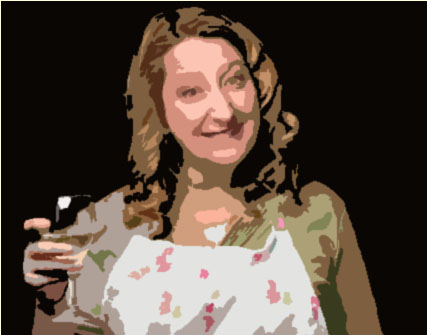 ‘Shirley Valentine’ is a one-character play, written by the Liverpudlian playwright and composer, Willy Russell when still in his thirties. This much-loved, hilarious play premiered 1986 in Liverpool, but it was Pauline Collins who took the show to London and Broadway for the 324-show run. In 1988-89, the play won Laurence Olivier Awards for Best New Comedy and Best Actress, and Tony Awards for Best Performance by a Leading Actress and another for Best Play. It went on to win another award for Outstanding Broadway Debut.

This quality production is an admirable community partnership between Laughing Horse productions and the Koorliny Arts Centre. It can be seen at the Kwinana Theatre Workshop Theatre, Sulphur Road, Kwinana Town Centre. Only a couple of kilometres along Thomas Road from the freeway.

The seating is comfortable but there used to be daises to give tiered seating, or could the seats possibly be put in semicircles with the table as the centre of the circle? This would improve the sightlines.

Performances are at 8.00 pm on Friday and Saturday nights until 13th September. There are two matinees, one on Sunday 7th and another on Saturday 13th, both at 2.00 pm.

The scene is a working class home in Liverpool in the 1980s. The eye-catching setting is a fully equipped kitchen and dinette. The last Act is of a Greek beach scene. Production manager Jon Lambert, stage manager Cally Zanik and the small LHP team have given us a two convincing sets. They have also added a little stage magic by convincingly ‘cooking’ the food on a cooker with no gas or power, and it looked ready to eat – good one.

We join 42-years old Shirley Valentine in her kitchen, preparing yet another evening meal for her unappreciative husband. Over the years Shirley has found that the kitchen wall is a far better friend, and more responsive, than her brain dead, boring husband. Then one day, Shirley’s best friend wins a ticket for two to Greece and suggests that they go to the Greek Isles together. Being a dutiful and conscientious wife, Shirley has grave doubts at first, and then after much discussion with ‘wall’, she realises how her lifestyle has changed with marriage and decides to go and try to discover her lost youth and vibrancy.

Normally I only mention the programme when all else is so bad that I have to try to say something good about the play, but Danni Close (with the help of Dark Studio Photography), has produced an extremely professional and imaginative programme.

The stage lighting and sound were very good (Alex Coutts-Smith) with a cleverly devised view from the kitchen window.

A few years ago, Adam Salathiel very successfully directed Diana in another Willy Russell play ‘Educating Rita’. Adam has directed this show and again proved his immense ability to understand the meaning behind every line of the rich script.

The star of this show, Diana Oliver, was only a month ago acclaimed for her bold and moving performance in ‘Steaming’, and here she is with a massive monologue, once again holding the audience in the palm of her hand. As a student, I lived with a lad from the Wirral in Merseyside and I really must compliment Diana, she has a genuine and never faltering, Liverpool accent. She credibly shows all the frustrations and confusions of a housewife caught in a boring and lonely relationship, your heart will go out to poor Shirley.

I have seen several versions of this play, and of course the Pauline Collin’s film, but this performance easy wins my praise as being the best version. The Liverpudlians have their own mannerisms and dry innate sense of humour, this magnificent performance captured every characteristic perfectly. Simply remembering the script is a massive task, but to capture the emotions, expressions and character, Diana WAS Shirley. A magnificent performance.